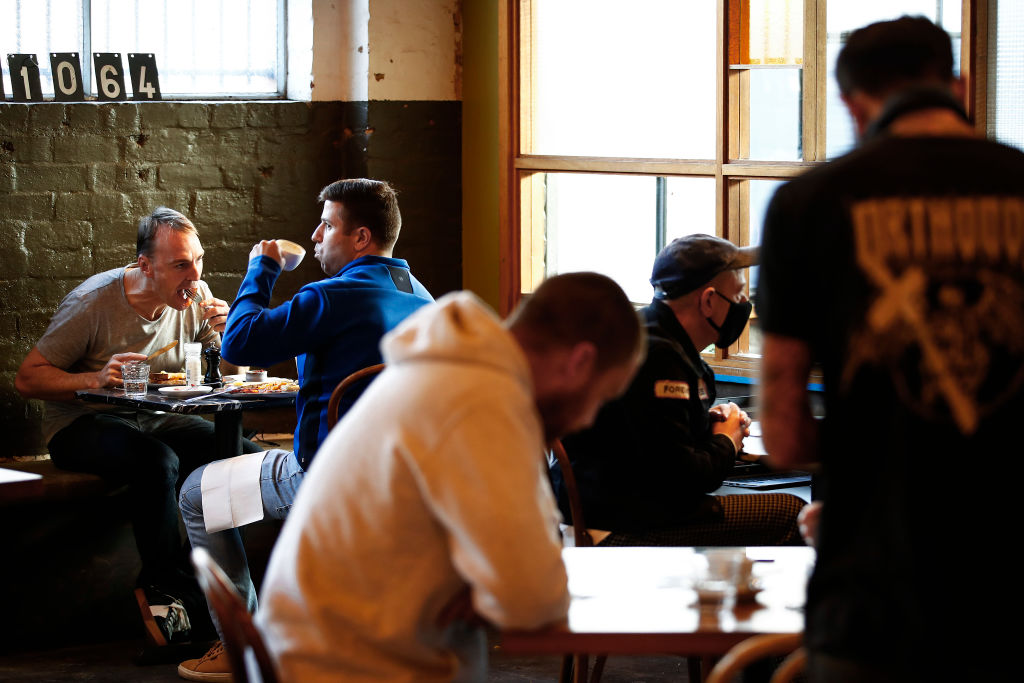 People dine in a cafe in Melbourne, where lockdown conditions have been lifted. Photo: Getty
Victoria has had two coronavirus deaths and two new cases as Melbourne emerges from its 112-day lockdown.

Wednesday's deaths, Australia's first virus fatalities since October 19, take the state toll to 819 and the national figure to 917.

The figures broke the state's two-day run of no deaths and no fresh cases, the first time that had happened since March.

On Melbourne's first day out of lockdown since July 8, its 14-day case average dropped from 2.8 to 2.7 and its mystery cases to Sunday halved to three.

The corresponding figures for regional Victoria are zero.

Melbourne restaurants, cafes, pubs and retail stores could throw open their doors from 11.59pm on Tuesday, with some wasting no time getting back to business.

Angus & Bon in Melbourne's southeast was one of the first restaurants to welcome back customers, serving patrons at the stroke of midnight.

The New York-style steakhouse in Prahran and other metropolitan hospitality venues can host up to 50 people outdoors and 20 indoors, subject to density limits.

While opposition leader Michael O'Brien welcomed the eased restrictions, he called for more clarity around rules for small businesses, especially in hospitality.

"You can see from the queues and the crowds that Melbourne has been waiting for this ... it's been too long coming," he said.

"We're still hearing a lot of concerns from hospitality that the rules, in some cases, just aren't workable."

Premier Daniel Andrews has also outlined new rules for home visits which were curtailed throughout Victoria's devastating second wave, making it difficult for people to see family and friends.

Two adults from one household can now visit another home accompanied by any dependents. The visits are restricted to within the 25km travel limit and to one per day.

Home gathering restrictions will remain in place beyond November 8, when the travel limit and the "ring of steel" separating the city from regional Victoria is lifted.

Masks should be worn inside gyms for most activities apart from running on a treadmill, with the premier earlier saying they will remain mandatory outdoors across the state for the rest of the year and possibly into 2021.

Home businesses such as hairdressers will be able to reopen if they have a "discrete retail area", while cleaners and maintenance workers may attend homes provided they wear a mask.

Halloween trick-or-treating will be permitted in Melbourne and regional Victoria this Saturday as long as it's "contactless", with people unable to enter properties, including front yards, to doorknock.