Warm welcome for royals ahead of Comm Games 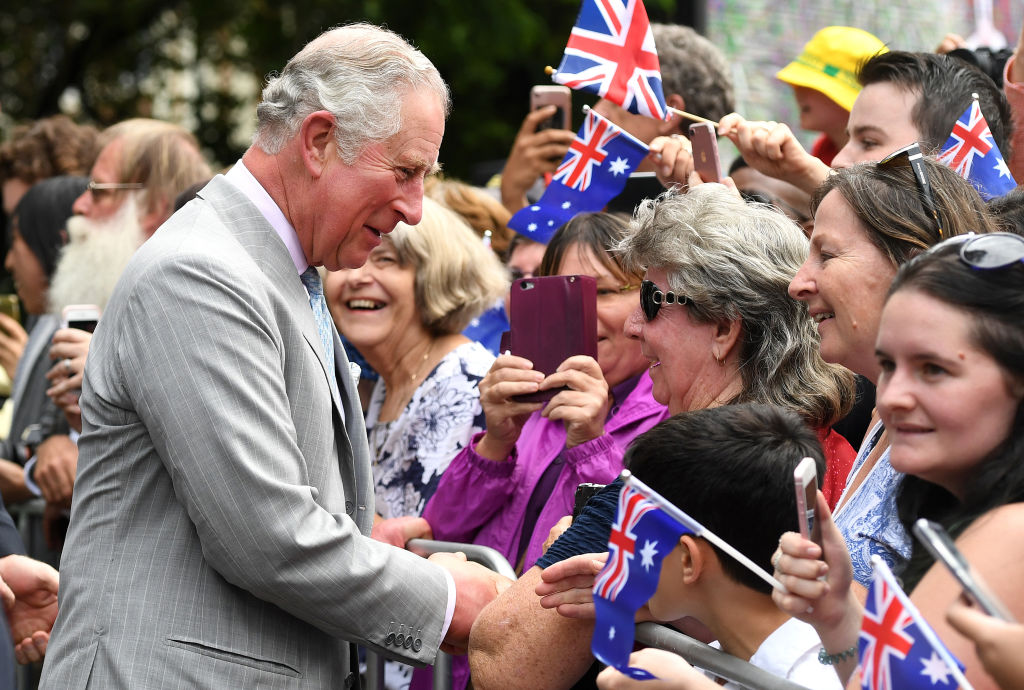 Prince Charles is greeted by members of the public in Brisbane earlier today. Photo: Getty Images
Several thousand flag-waving and cheering royal fans have greeted Prince Charles and his wife Camilla to Brisbane before the prince opens the Gold Coast Commonwealth Games tonight.

The royal couple touched down in Brisbane on a RAAF plane at 12.20pm (local time), after reportedly spending time visiting friends in Gundagai in country NSW.

Their first stop was Old Government House at the Botanic Gardens for the formal welcome to Australia.

After entering Old Government House, the royals and the Cosgroves exchanged some quiet, warm pleasantries, and Camilla smiled at the UK and Australian media contingent as she realised she had been left holding her umbrella.

But she politely declined an offer from a staffer to take it.

The royal couple signed the guest book and posed for an official photo with Sir Peter and Lady Cosgrove, before walking into a private area for a chat.

Camilla donned an elegant, wide-brimmed Philip Treacy hat to match her pale green Fiona Clare dress before heading back outside for the official ceremony, which included a 21-gun salute fired from across the river at Kangaroo Point.

The heir to the British throne inspected the royal guard of honour and God Save the Queen and the Australian anthem were performed.

Excited onlookers yelled out "Prince Charles!", before the royal couple split up to go to opposite sides of the barrier to shake as many hands as possible, with hundreds getting up close to the royals, during a break in the rain.

Prince Charles stopped to speak to Vanessa Cull from Runcorn, asking about the Girl Guides, asking whether it was hard to find leaders these days.

Chris Joyce, from Brisbane, spoke to Prince Charles about the weather.

"I just said that it's been rather hot lately," Mr Joyce said.

"He said 'thank goodness the gardens are still here and it hasn't been built on."

Penelope Edwards spoke with Camilla, who asked about the Commonwealth Games, the reason for the official royal visit.

"She said 'I hope you're going to watch the opening ceremony at the Games tonight,'" Ms Edwards said.

Another man told the future king that he shook his hand in the 90s.

Annabel's father, Brad Lauder, said her English grandfather Robert Marshall had also met Prince Charles, when he was working at a magistrates court in England.

The couple next visit Lady Cilento Children's Hospital before heading to the Gold Coast for the Games' opening.

The tour is the 16th trip to Australia and the seventh to Queensland for Charles, while it is Camilla's third visit.

It comes at an important time for the British monarchy, with republican sentiment gaining traction in Australia.

Prime Minister Malcolm Turnbull, who supports an Australian republic, says he is looking forward to catching up with the prince, who he says is a thoughtful, charming and knowledgeable man

"We always get on very well," he told ABC Radio.

"The prince and I, and Lucy (Turnbull) share a lot of common interests, particularly in terms of urbanism, architecture, planning, environment and ecology."

Charles will also visit Bundaberg and Cairns during his trip to Queensland, and is scheduled to fly to Vanuatu and the Northern Territory before heading home next week.