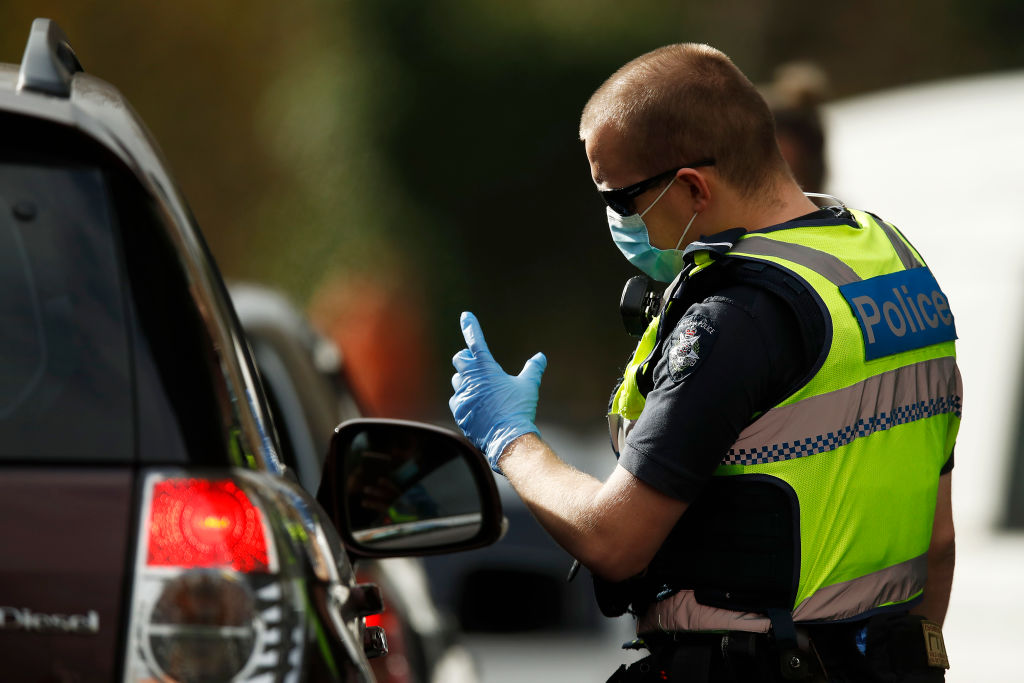 A police officer speaks with a motorist in Melbourne as the city prepares to go back into Covid-19 lockdown. Photo: Getty
Australians have been warned Melbourne's coronavirus outbreak could be replicated across the country as the city goes back into lockdown.

Melburnians will be forced back into stay-at-home restrictions from 11.59pm on Wednesday, as five million people in the state of Victoria prepare to enter lockdown for another six weeks.

Federal Health Minister Greg Hunt said no one should give "false guarantees" that Victoria's outbreak would not cross borders.

"It's Victoria now, it could be anyone," the Victorian MP told Sky News on Tuesday. "We're all going to have to live with this virus for a long while."

Victoria reported 134 new infections in the 24 hours to Wednesday morning, down from the previous day's record 191 but well over the low-single-digit daily increases of the seven other states and territories.

Of the new cases, 75 were occupants of nine public housing towers, that were earlier this week placed under the country's strictest lockdown so far. About 3000 residents have been banned from leaving the buildings, which are under police guard, for five days. All residents are being tested for Covid-19.

Nationwide, Australia has reported about 9000 Covid-19 cases and 106 deaths from the virus.

Victoria's Premier Daniel Andrews on Wednesday confirmed that 11 new cases were linked to known outbreaks and 123 were being investigated.

Six more cases have been linked to an outbreak at nine locked-down public housing towers in Flemington and North Melbourne.

Almost 30,000 people were tested for coronavirus in Victoria on Tuesday, bringing the total number of tests conducted to one million since January.

"I again thank every single Victorian who has come forward for a test and the many thousands of people who are working to take those tests and to process them," Mr Andrews told reporters. "We are all working as hard as we can, doing the very best that we can."

The lockdown affects residents in metropolitan Melbourne and the Mitchell Shire, north of the city. Under the rules, people can only leave their homes to get food and supplies, receive or provide care, exercise, and study or work if they can't do so from home.

"The decision to take these steps is not an easy one, it's not taken lightly, but it is the most appropriate response to ... take control of the virus, drive down case numbers, and get to the point where we can recommence that opening up in six weeks."

"We have to take this as seriously as we take bushfire. This is binary. It is life and death."

The state's bungled hotel quarantine system is the subject of a judicial inquiry after the virus spread amid alleged infection control breaches.

More than 250 members of the Australian Defence Force will join Victoria Police in enforcing the lockdown.

Police have the power to issue on-the-spot fines of up to $A1652 to individuals breaching the chief health officer's directives.

"We've done this before in restrictions we've been through. People know what to do. They know what to expect."

"On Sunday night we had an Airbnb party in Southbank where 15 people thought it was OK to get together and party," Mr Patton said, noting they were all fined.

Booze bus-type checks will also be in place on main roads in and out of the city.

"It won't be an absolute ring of steel, but there will be a significant police presence and a whole amount of those main arterial roads," Mr Patton said.

Except for Mitchell Shire, which takes in towns including Broadford, Kilmore, Pyalong, Seymour, Tallarook and Wallan, regional Victoria is excluded from the lockdown.

Mr Andrews said the government was "looking at options to accelerate opening-up in regional Victoria".

The Australian economy will take an economic hit of up to $A1 billion per week from the border closure and Melbourne lockdown, federal treasurer Josh Frydenberg said.

NSW has closed its border with Victoria, with permits to be issued for people who need to travel interstate for work or health care.

However the website to apply for a permit reportedly stopped working for a period of time on Tuesday night.

"We are aware that some people have experienced delays in securing a permit and we apologise for the delay," the spokesperson said in a statement to AAP on Tuesday night.

"In the interim, travellers will be able to demonstrate their eligibility to cross the border to police by carrying relevant documentation based on a category of exemption."

Only South Australian residents can enter their state from Victoria and those who do will be forced to quarantine for 14 days.

The federal government moved quickly on Tuesday to announce it would waive Victorian parent gap fees from Monday if children don't attend child care for Covid-related reasons in the lockdown areas of Melbourne.

The federal government will also ease the activity test until October 4 to help eligible Victorian families whose jobs are impacted by the coronavirus.

Meanwhile, Qantas and Jetstar will significantly reduce flights to and from Melbourne until the end of July at least following the border closure.

The federal government also agreed to cap international arrivals to WA at 525 people a week to ease pressure on hotel quarantine.

Queensland Premier Annastacia Palaszczuk also wants a limit on arrivals as pressure mounts for more flights to land in Brisbane.