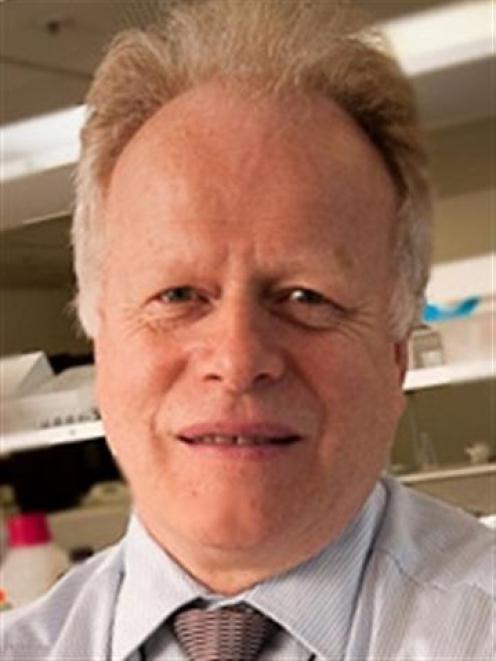 Richard Stubbs
Richard Stubbs is immersed in an international research race which he hopes will lead to a drug to cure one of the world's most prevalent diseases - type 2 diabetes.

If he wins, he says New Zealand will be able to build a massive drug production industry to produce a medication with potential sales of $US200 billion ($NZ289 billion) annually worldwide.

If he doesn't win, he loses everything.

Prof Stubbs' research is so unconventional, substantial financial support from the usual funders has run out.

But he has so much faith in his theory he has sunk about $2 million of his own money into the project. He has remortgaged his house to raise the $35,000 a month needed to pay his staff of three full-time scientists and two PhD students.

He has a applied for $1 million from the Marsden Fund and will find out in November whether he is successful.

Staff cuts are likely if he is not.

"I would love to see someone, or two or three investors, come forward with $1 million-$2 million. That would keep us going for a year or two . . . We're in a race now.

"There's no doubt about it. If we [New Zealand] don't win it, someone else in the world will."

Prof Stubbs, a surgeon who heads the University of Otago's Wakefield Biomedical Research Unit at the Wellington campus, believes people with type 2 diabetes produce a hormone in their gut which stops insulin from doing its job.

Overseas researchers have already discovered a hormone called glucagon-like intestinal peptide (glp 1) and produced a drug which reduces the negative impact the hormone has on insulin.

However, Prof Stubbs believes another hormone he has dubbed "factor X" is the hormone which needs to be targeted.

Over the past 10 years, he and his team have developed a method of analysing blood and painstakingly separating and purifying it to isolate the hormones.

Provided the research continues at the same pace, he hopes to have homed in on factor X within two years.

Once that happens, the pharmaceutical companies will be "falling over themselves" to develop a drug which completely negates the hormone's impact on insulin, he says.

Prof Stubbs has another theory - that obesity is a symptom of insulin resistance, rather than a cause. If that is so, the drug might also be used to help people lose weight, he says.

It could take six or seven years to develop the drug, but Prof Stubbs wants that to happen in New Zealand.

It could be the opportunity for the country to build a giant drug industry to rival our dairy industry, he says.

Prof Stubbs' interest in gut hormones began after he noticed that obese people with type 2 diabetes who had gastric bypass operations were "miraculously cured" of diabetes within six days, even though they had lost no weight.

Gastric bypass surgery involves surgeons reducing the size of the stomach and reattaching it to a lower part of the intestinal tract, bypassing the duodenum, where most of the chemical process of food digestion takes place.

Ten years ago, he published his first paper theorising it was a hormone produced in the duodenum which caused insulin resistance.

That view, which he said was considered "preposterous" at the time, had gradually come to be be accepted by the medical establishment.

Prof Stubbs said he "believed absolutely" the hormone he was searching for was not glp 1.

"In 10 years of research, we haven't come across a single piece of evidence to contradict the theory. That is what keeps me going."

Prof Stubbs (56) said he was confident he would find factor X and see a drug developed to counter its effects in his lifetime.

• Caused by having too much glucose (sugar) in the blood.

• In type 1 diabetes, the body can't make enough insulin, the hormone which allows the liver, muscle and fat tissue to take up glucose and convert it to energy.

• In type 2 diabetes, the most prevalent form, the body produces enough insulin but the insulin is somehow stopped from doing its job properly.

• It is not curable but can be managed through medication, artificial insulin and lifestyle changes. It has reached epidemic proportions in New Zealand. An estimated 270,000 people have diabetes, and more than 2000 people die annually of diabetes or related complications.

• Maori and Pacific Island people are three more likely to have diabetes than Europeans, and they more than five times as likely to die from it.