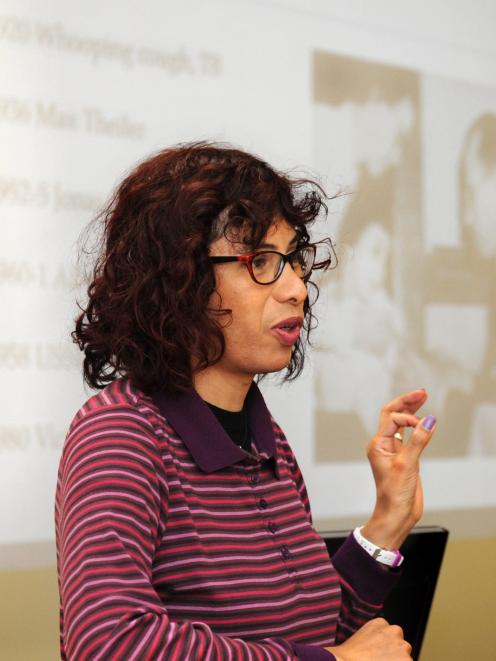 University of Otago academic Dr Josie Athens reflects on the long history of vaccination. Photo: Christine O'Connor.
Despite major achievements arising from the past use of vaccines, including the eradication of smallpox, there is no room for complacency over the continuing need to vaccinate.

Dr Josie Athens, a University of Otago senior lecturer in biostatistics in the university preventive and social medicine department, made that point yesterday.

Dr Athens was commenting after giving a public talk to about 40 people on "Understanding vaccines and how we protect ourselves against infections: an historical perspective".

In the latest of a series of public health seminars hosted by the department, she earlier said one highlight in the history of vaccination had come in 1980 when the World Health Organisation had declared that smallpox had been eradicated.

She traced the history of earlier efforts to fight smallpox back to China, about AD900, and later reflected on the growing momentum of efforts to counter the disease by vaccination in the 18th and 19th centuries.

She noted that English physician Edward Jenner had in 1796 successfully inoculated an 8-year-old boy, protecting him against smallpox by using material derived from cowpox blisters.

Despite previous success, there was no room for complacency about the need to continue administering vaccinations, with new diseases and vaccines emerging.

Vaccination did not simply protect individuals, but the overall population, she said in an interview.

People had long had some exaggerated fears about undergoing vaccination, including, when cowpox had been used, worries that they might start to develop cow-like physical characteristics.

"But we still need to vaccinate," she said.