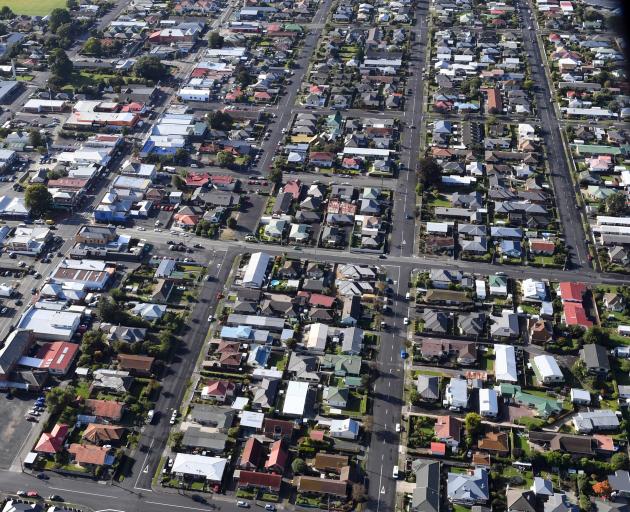 An aerial photo of Mosgiel. Photo: Stephen Jaquiery
Chris Rodley says the New Zealand coastal city of Nelson, in a region known for its vineyards and stunning landscapes, has always been a magnet for job seekers.

Yet those attributes are being eclipsed by a chronic nationwide housing shortage, making it difficult even for high-income professionals to find a home and impeding growth at his technology firm.

New Zealand's housing crisis is creating a policy headache for Prime Minister Jacinda Ardern as she seeks a second three-year term in the October 17 polls, turning the longstanding problem into a hot-button election issue.

The housing shortage and sky-high property prices are affecting broad sections of the population, locking out young first-home buyers and putting more pressure on those living on the margins. Middle-income New Zealanders are also getting squeezed at a time when the Covid-19 pandemic has jolted the $200 billion economy into its deepest slump in decades.

"New Zealand is a ludicrously attractive place to live in right now, which is helpful for me," said Rodley, the CEO of SnapIT, a tech firm that provides camera tracking equipment on boats.

"But to grow my company it's not just that housing is too expensive, it's simply that there just isn't anything."

Pollsters are predicting an election victory for Ardern, who has won global praise for her handling of the Covid-19 outbreak and other crises. All the same, the housing problem is threatening to not only blot her pristine credentials but also upend the economy and leave deep social scars.

New Zealand's central bank warned last year that rapid house price inflation over the past decade could lead to a sudden correction and threaten financial stability.

'NOT THE NEW ZEALAND DREAM'

An Ipsos New Zealand Issues Monitor survey in December showed three out of five New Zealanders (62%) believe they cannot afford to buy a home. More damning was that 61% believed this is a permanent logjam.

Housing was already a major issue when Ardern came to power in 2017, but her centre-left government struggled to address it after its flagship KiwiBuild project foundered.

It's one of the few blemishes during the 40-year-old Ardern's tenure, which has seen her transformed into a national and global icon, generating the phrase “Jacinda-mania”. Sam Stubbs, managing director of non-profit fund manager Simplicity, said many should be voting based on which party they think can help alleviate the strain on housing.

A recent Demographia survey showed New Zealand has one of most unaffordable housing in the world, and tops the list among OECD countries.

New Zealand's house prices have soared nearly 90% over the past decade, with some centres up 20-30% in the past three years, data from the country's property services firm Quotable Value (QV) showed.

IN CARS AS CHEAP HOUSES SCARCE

New Zealand has a shortage of over 100,000 homes, industry experts say, but from June 2018 through to July 2020 the government has built or helped build only around 6000 homes with another 4,000 under construction.

The problem, according to these experts, is that it costs too much and takes too long to build a house in New Zealand.

"The private market has much more capacity than it is currently delivering, and could do a lot more if some of the constraints around consenting and local body costs are removed," said Israel Cooper, Managing Director for Home, a construction company focused on housing and community projects.

The coronavirus has worsened conditions, as fewer new houses are being built even as more kiwis return home, while historically low mortgage rates have supercharged demand.

The housing pressures are most keenly felt by those already on the margins, with tens of thousands living in over-crowded homes, in emergency shelters, in cars and on the streets.

"People are basically enslaved. They are either enslaved in unsubstantial high mortgages where you need more than one income to maintain it or they are in rental where they are at the mercy of what those rental prices are," said Nick Clarke, General Manager at Habitat for Humanity, a NGO that helps first home buyers.