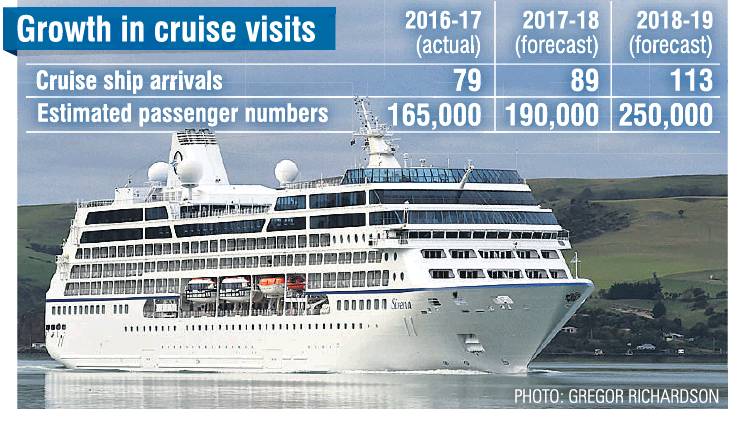 Dunedin is set for another massive rise in cruise ship numbers, with the 2018-19 season eclipsing anything seen before.

Up to twice Dunedin's population, as many as 250,000 people, are expected to sail past Taiaroa Head that season.

Despite the rise of 85,000 on the past season, Port Otago and tourism operators say they will be able to cope with the numbers, and all agree it is good news for the economy.

The Otago Daily Times understands that figure had already risen to 120 with recent bookings.

The Dunedin City Council heard this week in a report on the last cruise ship season at least 90% of passengers disembarked.

Port Otago commercial general manager Peter Brown yesterday said it was possible cruise ship numbers could change either up or down.

Mr Brown said development of infrastructure at the wharf meant the port was ''well placed'' to manage the numbers.

''It will be a challenge for the city to make sure we look after them all the way we would like them to be looked after.''

''I think the city will manage it OK.

''It is significant growth; it is fantastic for the Dunedin economy.''

Otago Peninsula Trust marketing manager Sophie Barker said one issue would be the clash with non-cruise ship visitors arriving in the city.

If cruise ships were booking the top attractions, managing numbers could prove to be a challenge.

The calendar for cruise ships was put out well in advance, so it was possible to plan ahead for the big days, Ms Barker said.

The increase would be ''great for employment''.

One challenge for the industry was employees were often casual, but the increase would provide more regular work.

When there were two ships on one day there was a capacity issue, and people could be turned away.

The railway had a business planning case to ''substantially increase our capacity'' by buying additional carriages, though that was yet to be finalised.

''We are certainly very well placed for a substantial increase in the cruise ship market.''

After discussions about staffing, there was ''no question'' growth would mean more jobs.

Olveston manager Bronwyn Simes said the cruise ship increase was taking the business back to numbers it used to host when coach tours were a bigger business, and Olveston was part of coach packages.

There was already ''peak capacity at certain points'' when no more people could be accommodated on tours. The business tried to spread visitor numbers throughout the day.

When two or even three ships arrived on one day it was not possible to deal with numbers, but spread out ''it's great for us''.

Asked about the effect on busy areas like Baldwin St, where numbers arriving have angered some locals, he said the city needed to keep ''lifting our game in terms of the offering we have and how we handle, receive and host that number of people''.

He did not think there was a backlash here against tourists, as had been seen in other parts of the world, as numbers
grew.