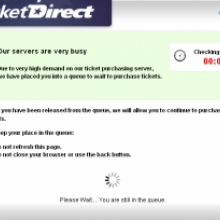 Waiting, waiting
Pre-sale tickets for Aerosmith's April show in Dunedin have been in hot demand this morning.

Fans hoping to see the band play at Forsyth Barr stadium reported waiting up to 20 minutes before being able to select their tickets.

The TicketDirect website was displaying a message telling fans they had been placed in a queue because of "very high demand on our ticket purchasing server."

"A queue simply means that we are managing the load in an intelligent fashion and ensuring that everyone gets through cleanly and without fuss. 20 minutes to get through that load was pretty awesome, in context."

Pre-sale tickets for Visa customers went on sale this morning for three days with tickets ranging from $129 to $199 to see the United States rock band along with four other bands - Wolfmother, Dead Daisies, Head Like a Hole and Diva Demolition.

The most expensive tickets are for the standing area in front of the stage at $199, although the lounge area in the Speight's stand has a price tag of $199-$249, the map on Ticket Direct's website indicates.

The cheapest tickets were for the Mitre 10 stand and general admission on the pitch would cost $149.

Tickets to the Aerosmith event go on general sale on March 4.