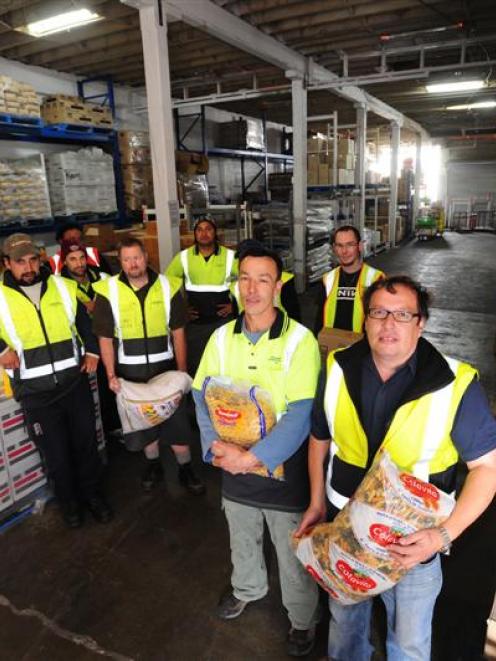 Kaan's Catering owners Lindsay (front right) and Geoff Kaan in their Willis St warehouse with some of about 50 workers they employ in Dunedin (from left), Corey Wilson, Mal Brydie, Matt Dawson, Soa Dubou and Alex Rogers. Photo by Craig Baxter.
A district plan change allowing Dunedin's harbourside to be redeveloped with apartments, bars and cafes has been approved, prompting an angry reaction from business owners in the area, with one saying he may move his business to Christchurch.

But Dunedin City Council chief executive Jim Harland said yesterday the plan was "a 50-year vision". It was not likely to go ahead soon, especially in the current financial climate, and businesses had existing use rights under the plan.

The decision, approving stages one and two of the development was released yesterday, following a nine-day hearing in July and August last year.

The decision means many aspects of the submissions to the hearing were rejected, including the New Zealand Historic Places Trust's opposition, although 10 more buildings than originally suggested were included for protection under the district plan.

The plan change means an area defined by the harbour edge, Thomas Burns, Mason, Birch, French and Buller Sts, subject to an appeal period, will change from industrial and port zones to a new harbourside zone.

It also confirms two notices of requirement to designate areas for a walkway on Fairley St, which will cut through buildings in its path.

Under the proposal, developed by the council and Port Otago's property investment subsidiary. Chalmers Properties Ltd, the change of zoning would set a platform for developers to move in and invest in the area.

He had argued during last year's harbourside hearings that a plan change would make it too difficult for his business, which operated 24 hours a day, six days a week with large truck-and-trailer units making deliveries, to continue to operate.

He warned yesterday the company might move its head office to Christchurch, with the possible loss of 20 jobs.

"Do they want businesses to stay or move?"He was not sure whether the business would appeal the decision.

Other businesses raised concerns about what they would do when their building leases came up for renegotiation, given the uncertainty of the future.

Farra Engineering chief executive John Whitaker argued last year there was genuine optimism about commercial oil discoveries in the Southern Ocean, and engineering and logistics support at the harbourside could provide economic benefits for Dunedin.

Yesterday, he said he had not read the full document but was "disappointed" with the decision

"This is done for residential purposes, but it's not beneficial to industry."

He would gauge the support of other businesses before deciding whether to appeal to the Environment Court.

Chalmers Properties owns most of the land and has said it would freehold some to enable development.

The city council has about $10 million set aside for public amenities and roading access, although the funding was deferred during budget hearings earlier this month.

However, $5.3 million was included for the next two years to purchase properties, while $4.2 million for access and amenities was deferred until the 2013-14 financial year.

Mr Harland said the decision would create a harbourside that was "a vibrant and attractive place to live, work and visit".

Residential developments had to meet stringent internal noise standards, which were developed for Port Chalmers to deal with 24-hour noise from the port, and "those have proved to be successful".

Despite the funding deferral, the council had money set aside to buy buildings owners wanted to sell under the designation, and it was possible for developers to begin once the appeal process was finished.

Commissioners Roger Tasker and John Lumsden said in their decision document that rezoning both stage one and two would provide "certainty for occupiers and developers as to the vision for the wider area".

"We are satisfied that the objectives, policies, methods and rules will manage the effects of establishing a mixed-use environment, which includes industrial activities, in close proximity to the working Dunedin port."

Historic Places Trust Otago-Southland area manager Owen Graham said he had received the document, but did not want to comment on it until he had read it fully.