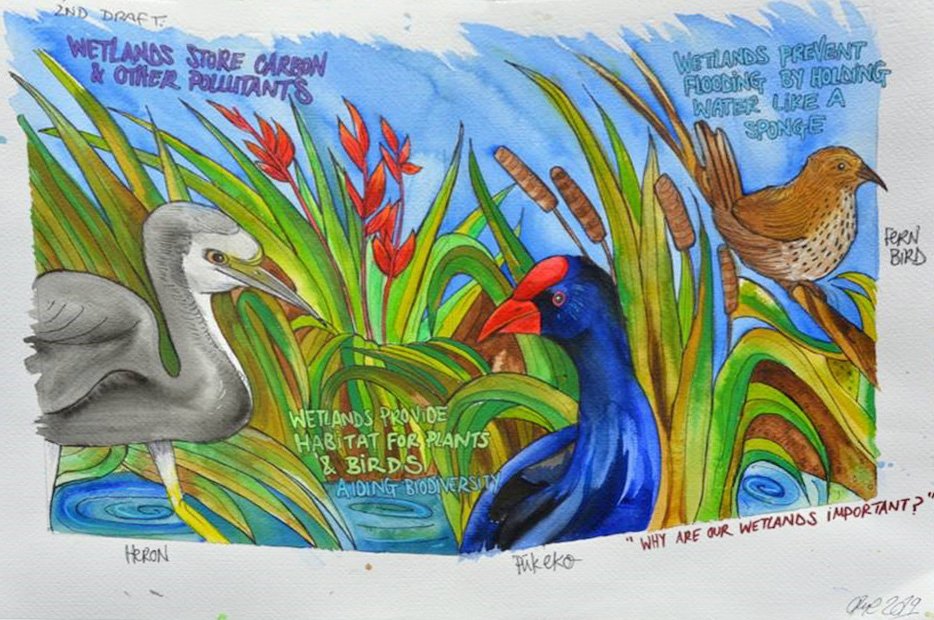 Artist Claire Rye's mural paints a picture of hope for South Dunedin.
Two Dunedin artists' work will be installed in Dunedin after they won a national art competition.

Madison Kelly and Claire Rye were selected as two of 10 winners across New Zealand and will have their murals painted in Dunedin.

Her design represented a "visual harmony" between the local peaks of Mihiwaka and Mopanui and Orokonui stream.

Her design also featured species that may join Orokonui forest in the future, such as the kakariki and tieke.

Two worlds colliding in a conservation effort are represented in Madison Kelly's design.
Her mural has been proposed for the operations staff and volunteer headquarters of the Orokonui Ecosanctuary.

Ms Rye's design, How Wetlands Help, is based on the drained wetlands South Dunedin is built on.

The mural shows a pukeko and heron standing together in vibrant wetlands.

Ms Rye said South Dunedin had been identified as one of the areas in the city most vulnerable to climate change.

Her mural has been proposed for the public toilet block in Lorne St.

Chief executive of Keep New Zealand Beautiful Heather Saunderson said many studies had shown the benefits of murals in communities, including increasing civic pride and a reduction in antisocial behaviour such as littering and graffiti.

She was excited to see the murals come to life.

The winning designs received a $1000 grant and a $750 Resene paint voucher.