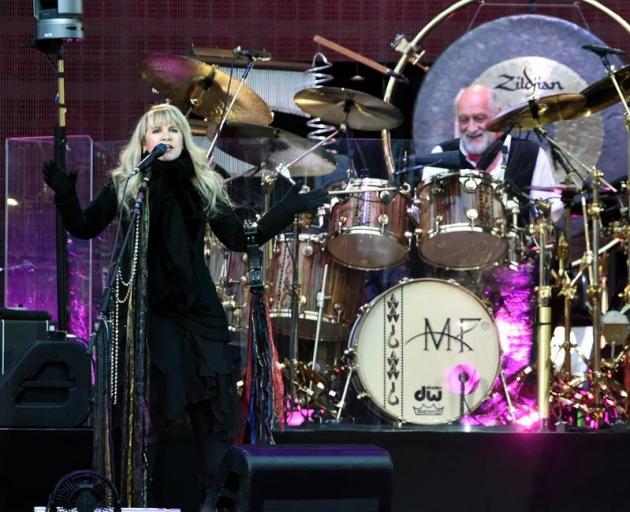 Fleetwood Mac in concert at Dunedin's Forsyth Barr Stadium in November 2015. Photo: Gregor Richardson.
A liquor ban will be imposed around Forsyth Barr stadium when Fleetwood Mac returns to Dunedin on Saturday after police faced problems when Six60 performed earlier this year.

Alcohol harm prevention officer Sergeant Ian Paulin said this would be the first time a liquor ban would be in place for a concert at the stadium.

Police asked for the ban after they encountered problems outside the Six60 concert in March.

Police had a lot of problems with people "drinking right to the gate", Sgt Paulin said.

who is excited to see Fleetwood Mac live under the roof this Saturday? Get all your need to know concert info here: https://t.co/acfKnUurkB pic.twitter.com/6NitM6GpHq

"One of the ways we can mitigate that risk is to push that drinking back a bit" added Sgt Paulin.

There would be signage informing people about the ban and rubbish bins around the zone to discourage littering.

Anyone caught flouting the ban could be issued a fine of $250 and could even face arrest in extreme cases.

He added that people who showed up to the concert intoxicated - a common occurrence - would be refused entry by stadium security.

Stadium security would assess people for signs of drunken behaviour as they walked up to the gates and queued up.

"[That's] the good thing about having a queue", Sgt Paulin said.

It is estimated about 30,000 will attend the concert.

More anti alcohol lunacy by Dunedin police. Because of course the sixty year olds going to see Fleetwood Mac are just as out of control as the twenty somethings at a Six60 concert.
Maybe they should have a drug testing tent there as well, lots of attendees will be popping blood pressure pills - you never know what effect they could have.

You seem to believe intoxicated seniors are less of a problem than young ones.

This is not the experience of Police, according to a story elsewhere on the 'Net.

Middle aged women. By their queue teetering shall you encounter them.

Great! I wish they'd done that when Roger Waters was playing. It would have made it possible to hear his voice and music instead that of a crowd of drunks around us. Their musical skills were not really worth the money!

Wait..... or will alcoholic beverages be sold INSIDE the stadium?