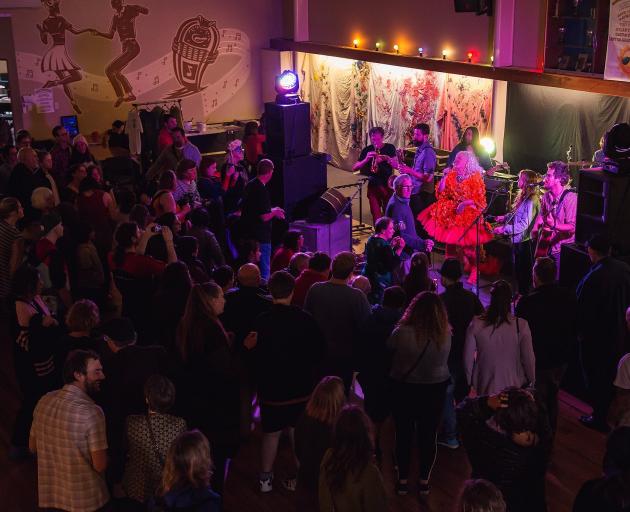 In its second year, the idea behind tomorrow's event is to create an accessible and inclusive environment for everyone to enjoy some of the great local music Dunedin has to offer. It's also a great opportunity to hang out and have a good time on a Sunday.

Putting it all together are musicians and support workers Benton Glassey and Steve Marshall, who recognised that a significant portion of the community was being excluded from experiencing live music and decided to do something about it.

"We kind of just talked about the idea of, you know, why we don't really see the people we support at gigs and how we could do something to change that.

It turned out making a gig more inclusive wasn't really all that hard, it was just a matter of putting a bit of thought into it.

"So it's going to be at the South Dunedin community hall, so that venue is really accessible, it's wheelchair accessible.

"It's on a Sunday from 2pm-6pm, so that's another thing. Having it at a really accessible time helps people, if they need support it's an easy time for them to get support or, you know, buses and whatnot.

"And it's free. Cost can be another thing, not just for people with disabilities but people in general, so just making it free is just another way of making it more accessible.''

Last year's event was a huge success, enabling people to get together and hear great local music they might not have heard before, and attracting a far more diverse crowd than you'd get at your average bar gig.

"It went really well last year. A couple of hundred people showed up and over the course of the day kind of boogied away and just had a really great time.

"It's not keyed specifically towards young families but we had a turnout of people with kids.

"Normally people would have to get babysitters or whatnot, so having it in the middle of the day you can just kind of rock up and it's free, and family friendly, no alcohol as well, which just makes it easier for everyone.

"And music's a bit of a social lubricant, so it's like when people started dancing everyone just started having a really great time and that's kind of what we're putting the event on for. It's a real common thing, enjoyment of music and dancing; that's a real universal language really.''

There's a solid line-up of local bands at this year's event, from bluegrass to rock and roll to acoustic David Bowie covers.

"It's something that if people don't really have the experience, they don't really know how to act around people with disabilities, so we're just really breaking down those barriers.''