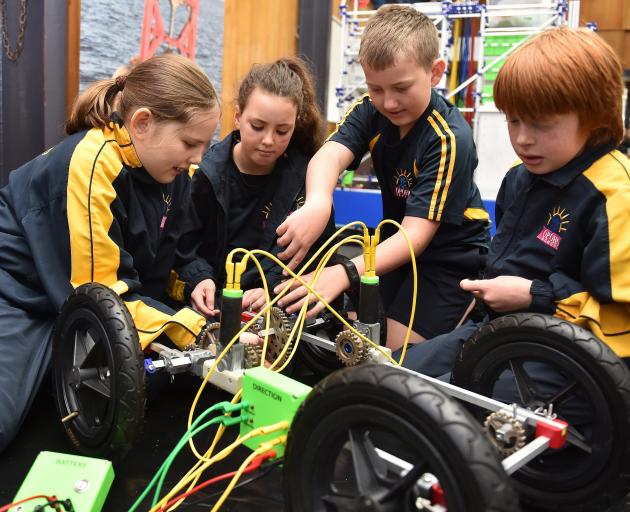 The EPro8 Challenge is an engineering competition for intermediate-aged school pupils.

Held at Dunedin North Intermediate School this week, the finals had teams from schools around Dunedin come together to battle it out for first prize.

EPro8 Challenge event manager Kelvin Thiele said that at each event, teams were based at a workstation that contained an assortment of engineering equipment.

They were given four challenges to choose from, each having different elements of science, engineering, practical mathematics and problem-solving.

The actual challenges were a secret until the event, and were designed to give pupils a fun and rewarding introduction to science and engineering.

Teams this year had to choose from a fishing contiki, a waka/yacht, a navigation sextant or a lighthouse.

Past challenges included motorising a supermarket trolley, constructing a crane and calculating how many balloons it would take to make a friend float away.

The standard was increasing every year, Mr Thiele said.

Organisers were now giving pupils tasks in first-round challenges they would have only set in a grand final in previous years, he said.

"This is a credit to teachers who have embraced STEM and seen its educational value."

Opoho School pupil Charlotte Guy (10), whose team was also in the final, said it was fun solving problems and working independently with her teammates Arlia Davis (10), James Fagerlund (11) and Marshall Williams (9).

"It’s fun because we work together."

East Taieri School team Boy Gang, consisting of Oliver Campbell (11), Jesse -Allen Taylor (11), Ryka Mulder (11) and Oliver Wang (11), said they participated in the event because they were good at building.

"I want to be an engineer," Oliver said, a sentiment echoed by the others.