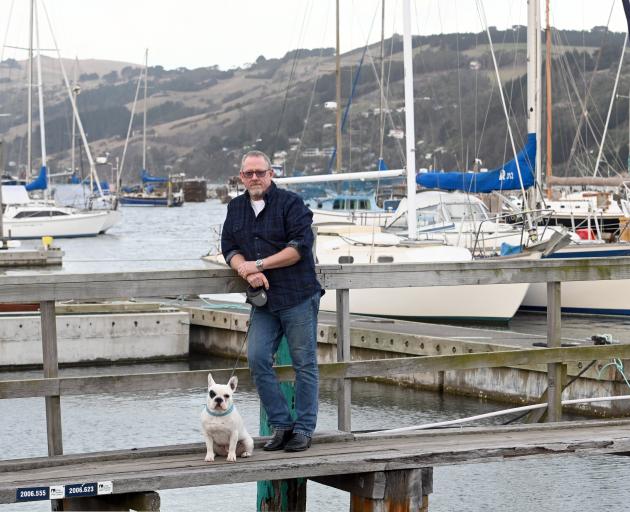 Sailor Chris King, of North Taieri, pictured with his dog Ted, backed calls for a harbour management group to be formed. PHOTO: LINDA ROBERTSON
Otago Harbour authorities had to work together to ensure the harbour was able to compete on the national and international stage, councillors heard yesterday.

Port Chalmers Yachting Club commodore Steve Duder said a harbour stakeholder group should be formed "for the delivery of a comprehensive long-term plan".

The group was necessary because responsibility for the harbour was split between the Dunedin City Council and the Otago Regional Council.

"A layer of complexity exists in the planning and delivery of complete solutions."

The proposed group would include both land and marine-based stakeholders and be led by both councils alongside Port Otago.

"In January next year, round seven of the SailGP will be held just up the road in Lyttelton Harbour.

"That is just an example of the opportunities that might exist for our harbour."

"They all need to talk together and get something happening. I can remember my uncle back in the ’60s talking about things like this and it’s just gone backwards."

Mr King said facilities for recreational boat users were "dwindling", and he was concerned about reductions to the wharf at Careys Bay.

"Quite a few local boaties are losing their moorings."

"Mr King said facilities for recreational boat users were "dwindling", and he was concerned about reductions to the wharf at Careys Bay" not only there but elsewhere too, berths gone from the harbour basin and there is talk of the marina at Otago Yacht Club being taken over and exorbitant sums being charged for berths.