By Mike Houlahan
0 Comments
Retiring University of Otago chaplain Greg Hughson has a different perspective of the campus landscape than most.

While others see buildings and gardens, he sees buildings where students endured personal crises, and trees planted as memorials to deceased Otago students and staff.

In 20 years as a university chaplain, Mr Hughson has offered support at times of grief, hope at times of crisis, and at all times been available for a chat with anyone needing to talk.

"We are often involved in responding to sad events and that will sometimes lead to memorials or funeral services, tree plantings, and following up with grieving people for many months or sometimes years to come," Mr Hughson said. 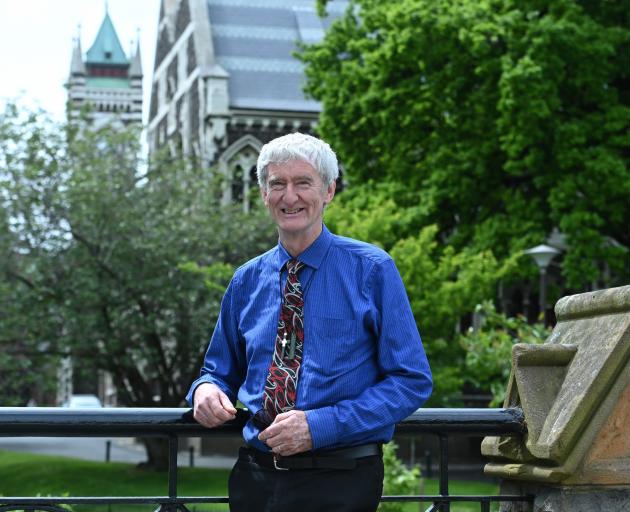 Retiring University of Otago chaplain Greg Hughson. Photo: Linda Robertson
"That had been satisfying, knowing that we were able to help; it is often our presence with people that is mentioned afterwards, rather than anything that we do or say, just that we are there."

Mr Hughson was officially farewelled on Tuesday night at St Margaret's College, the residential college where his service as a university chaplain began.

His term has encompassed the Baldwin St wheelie bin death, the murder of Sophie Elliott, and student deaths through illness or suicide.

"We respond in a way which is appropriate in each situation, and the good thing is that we are a chaplaincy team and no-one has to deal with anything on their own."

Mr Hughson's final year on duty has been one of his busiest, playing a leading role in Dunedin's community service to mark the March 15 shootings, and more recently offering assistance to those affected by the death of Sophia Crestani at a Dundas St party last month.

"As chaplains we are always responsive after major incidents, there are between five and 10 of those a year," Mr Hughson said.

"It is very satisfying to know that
we are able to offer compassion, pastoral and spiritual support at a time of crisis, and I know that is something that the University of Otago and Otago Polytechnic do value from our chaplaincy service."

Staff, too, used the chaplaincy service, and Mr Hughson had assisted people of all faiths, or none.

While helping people through the stress of exams, the rigours of mental health issues and to face life challenges were a major part of the job, it could and did also bring unexpected joy.

"I had a woman come in once, I had never met her before, she asked me if I was Greg Hughson, I said yes, and she said: `I found you on the internet, would you marry me?"'

"I said that's an interesting request, but I'm married already ... she went on to say she had found me on the chaplaincy website, found my background was in biochemistry, she was doing a doctorate in biochemistry and thought it would be lovely to be married by a biochemist.

"We had a lovely service at the art gallery on New Year's Eve many years ago, followed by the fireworks at midnight, and I am still in touch with that couple."