Songbirds will be singing like never before at the University of Otago’s new music and performing arts centre.

The $26million building has a theme of the songbirds of New Zealand.

Each room will represent a different bird and will be painted a different shade of green.

School of Performing Arts head Anthony Ritchie said the theme was symbolic to the building’s purpose.

‘‘Birds are wonderful song and music makers so it was an appropriate image to use for this wonderful building.’’

The build of the Music, Theatre and Performing Arts Centre was well under way, and while a lot of interior work still needed to be finished, its doors were expected to open for students when the first semester starts later next month. 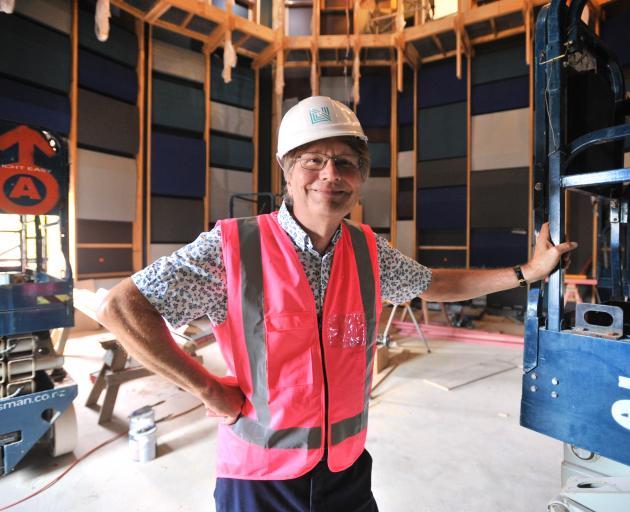 Standing in the new recording studio at the University of Otago is the head of the School of Performing Arts Prof Anthony Ritchie. Photo: Christine O'Connor
The project involved constructing a new two-storey recording studio building, as well as refurbishing the connecting College of Education’s music suite, teaching wing, tower block and part of the education resource centre.

The recording studio would include a space with seating for 100 people, two control rooms, recording booths, and practice rooms.

‘‘It’s going to be a wonderful hub for students to gather, mix, mingle and make music.

‘‘The whole facility will be vibrant and modern, enhancing the arts and music scene on campus and in Dunedin in general.’’

The building would be available for commercial use, and high schools would be invited to use the rooms.

Prior to the new building being built, music and performing arts programmes were held in rooms spread across the university campus.

The original music studios had to be demolished because of asbestos.