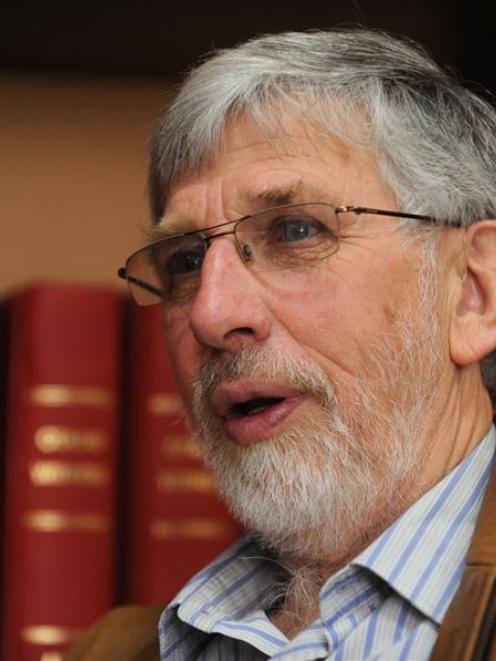 But now the Dunedin City Council's veteran transportation planning manager is facing the challenge of his life - grappling with the realities of motor neurone disease (MND).

Speaking yesterday, Mr Hill (63) confirmed he had been diagnosed with MND in January, after suspicions were raised by a team of neurological experts examining his symptoms just before Christmas.

The degenerative disease, which has no cure, attacked nerve cells in the brain and spinal cord - called motor neurones - causing those with the condition to steadily lose control of their muscles.

About 200-250 people had the disease in New Zealand at any one time, and those diagnosed faced a life expectancy of between two and four years, the Motor Neurone Disease Association New Zealand website said.

Mr Hill told the Otago Daily Times he had a rare variety of MND called bulbar palsy, which attacked the tongue and throat and led to a progressive loss of speech, the ability to swallow - and choking.

The diagnosis had come as a shock to the otherwise healthy Mr Hill, who said he had no clues to his condition until last year, when he began to have difficulty drinking and eating some types of food.

He was believed to be one of only about three people in Dunedin with MND, which also occurred in about three in every 100,000 people internationally, he said.

Current medical thinking was that only about 5% of cases had any possible link to family history.

The diagnosis meant retirement plans made with wife Lori had been turned upside down in a heartbeat, Mr Hill said.

"It was quite shattering. It's something you never think about.

"You have no conception - you are moving through your life on a plane . . . then you get this diagnosis and everything goes head over heels.

"My wife has had to come to terms with the fact the life we have planned is not going to happen," he said.

The couple had been forced to sell their four-level Portobello home, which Mr Hill built, 14 years after the couple bought the section and turned a "paddock" into a lavish garden open to the public upon request.

"That was where we were going to spend the rest of our lives," he said.

Instead, they had bought a more manageable single-storey home in St Leonards, taking some of their prized plantings with them, while Mr Hill organised his affairs and handed over his council duties to other staff.

Mr Hill was also looking forward to his daughter's wedding later this year - one of three adult children - and a trip to Europe would follow, he said.

Mr Hill has been on sick leave since his diagnosis and would be the guest of honour at a Dunedin City Council civic reception next week, marking his contribution and early retirement.

Along the way he has overseen everything from the widening and building of new roads to accommodate the city's housing boom and a variety of construction projects, and the introduction in the mid-1970s of the council's asset management system - a New Zealand-first, still used today up and down the country.

He had stints in the United Kingdom, "building motorways" for several years in the 1970s, and a period spent ironing out problems between contractors on a roading project in a remote jungle area of Papua New Guinea in 1980.

In the late 1980s, he oversaw the redevelopment of Dunedin's George St and Octagon, which caused initial "angst" but was later accepted by the community, he said.

"That's probably the biggest project and the biggest change the city has had for some time," he said.

And, as transportation planning manager, Mr Hill has been involved in more projects courting controversy - including the planned Riccarton Rd upgrade and last year's debacle over inner-city parking.

He lamented the council's inability to "bring the people with you" while introducing the parking changes, but insisted the revised changes were now working.

Asked about his medical prognosis, Mr Hill said it was unclear as doctors could not say how fast symptoms would progress.

However, he was determined to focus on the time he had left and make the most of life, rather than dwell on the disease.

"I'm not the sort of person who does that.

"I'm focusing on the things I need to do to ensure the future is fine for Lori," he said.