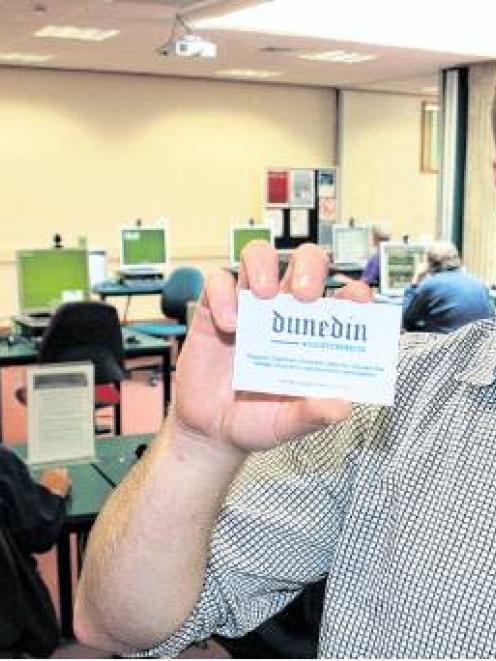 Making it happen . . . Digital Office projects manager Josh Jenkins urges people to support Dunedin’s bid to become Gigatown — the city with the fastest broadband in the country. Photo by Dan Hutchinson
Complacency could be Dunedin's biggest enemy as it competes for the title of ‘‘Gigatown'' and the fastest internet service in the country.

Chorus' Gigatown contest will see one town provided with ultra›fast broadband - up to one gigabit per second - at wholesale prices.

An extra incentive started this week, with 75,000 points going to the town that nets the most support by Tuesday next week, on top of the 10 points for every person who signs up.

Last year, The Star talked to Dunedin businesspeople about the competition, who all said winning would remove many barriers, like being isolated from the rest of the world.

Animation Research managing director Ian Taylor said the competition was an opportunity but if people did not get behind the campaign, the city could be left behind.

Five finalists will be chosen in September, and then go on to compete for the prize.

‘‘Dunedin people tend to be a little pessimistic, they tend to leave things until the last minute, until it is too late. . .it has been a little bit frustrating getting the community engagement that I would have liked,'' Mr Jenkins said.

He said people struggled to get their heads around what the prize meant and the opportunities it offered.

Chorus is the wholesale provider of internet services and will provide the high›speed capacity to retailers, who would then pass that on to their customers through various packages.

The Government and Chorus are part›way through a massive project that will see ultra›fast broadband cables outside almost every home in the next few years.

Mr Jenkins said some businesses already had ultra›fast capability but were paying thousands of dollars for it. This was likely to come down in price as more people connected.

Gigatown would give a head start to one town when it comes to pricing and applying the new speeds.