A lively crowd takes a close interest. Photos: Peter McIntosh.
A strong sense of place in Dunedin writing, as well as ancient links between walking and storytelling, were highlighted at a University of Otago conference yesterday. 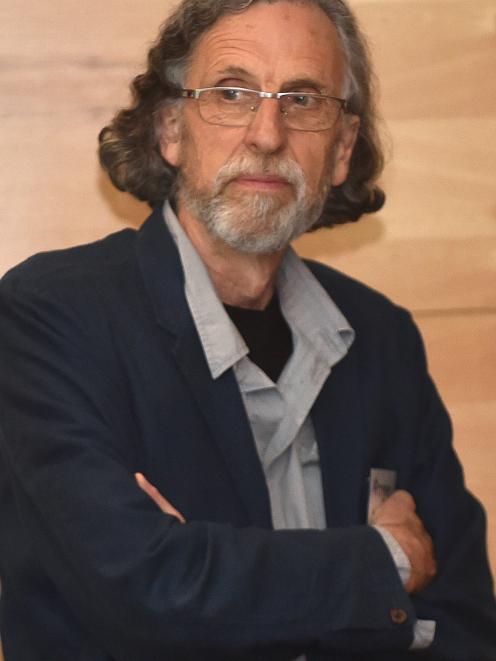 Former Dunedin poet Roger Hickin at a ‘‘Book and Place’’ conference yesterday.
And those points were made by former Dunedin poet, translator and publisher Roger Hickin, now of Lyttelton, in a talk, titled ‘‘A Town Trod by Poets: The Search for Truth on Dunedin Streets’’.

This talk, to more than 50 people, was part of the university’s annual symposium on ‘‘Book and Place’’, organised by the university Centre for the Book, and held at the Otago Museum’s Marjorie Barclay Theatre.

Mr Hickin noted that 18 or more poems in Janet Frame’s collection The Pocket Mirror were ‘‘located within the city’’, with three titled, respectively, Dunedin Poem, Dunedin Walk and Dunedin Story.

The editors of Under Flagstaff, a 2004 anthology of Dunedin poetry, had stated in their introduction to the publication that "Of all New Zealand’s cities, Dunedin seems to have evoked more poetry than any other".

James K. Baxter’s Collected Poems also had 20 or more poems which had a Dunedin setting, and You Fit the Description, the selected poems of Peter Olds, had at least 25 such poems set within Dunedin.

Many of the Dunedin poems of Olds were stories of, and footnotes to, his walks "street after salt-wind street".

Some walks were "steps towards illumination" but others had a "grimmer cast" to them. And Charles Brasch, another keen walker, had "intoned a mantra of street names" in one of his late poems: "Great King, Filleul, London, Albany Steps", and he had tramped his streets "into recognition".