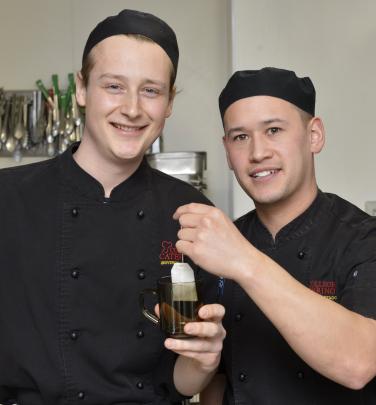 The pair had 70 minutes to produce two courses, which had to include mystery ingredient Dilmah black tea.

Mr Henry ended up adding it to gravy, while Mr Cohen used it in the fondant cake sauce.

The MasterChef-like competition gave the university's college chefs, who were producing millions of meals for students each year, a chance to showcase their abilities, Mr McNeill said.

The judges, from Otago Polytechnic, Vault 21 and Southern Hospitality, had all travelled the world to judge and compete in cooking competitions.

"[They] always comment on how fantastic and professional their [the college chefs'] food is.

"I'm just so proud of what [the university chefs] are capable of doing," Mr McNeill said.

Some of the college chefs chose to include the tea by smoking the food with the tea, while others used it as a marinade or in a sauce.

Mr Henry has also cooked for Cumberland College, during which time he was on the winning team twice.

At Aquinas, he and the team of about 14 prepared meals for more than 156 students each day.

Each time he participated he had a new cooking partner, so each competition was different, he said. He had also won places on several occasions during the 10 years the competition had been running.