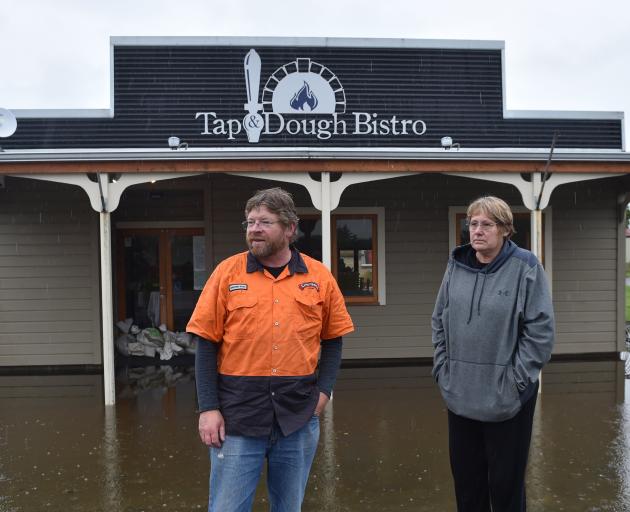 Tap and Dough Bistro owner Norma Emerson (right) with her husband Richard outside the flooded premises. Photo: Peter McIntosh
The rural community of Middlemarch has begun its clean-up after Tuesday's downpour transformed some streets into sewage ponds.

The town's residents and business owners are now looking for answers as to how their area could be so badly affected.

It will be a long recovery for some with the town's busiest season just around the corner.

"It's heartbreaking seeing them ripping off our wall linings and our counter, which we spent quite a lot of money on and were quite proud of," she said.

"I don't think there's going to be much standing inside the building. We are going to be left with an empty shell that we will need to refurbish."

The business opened about a week ago but Mrs Emerson was already counting the cost of the damage, as well as lost business that would eventuate from it being closed until at least Christmas and potentially even into late January.

The summer was the busiest time of year for the town, which marks the beginning of the Otago Central Rail Trail, and lost earnings could not be clawed back. 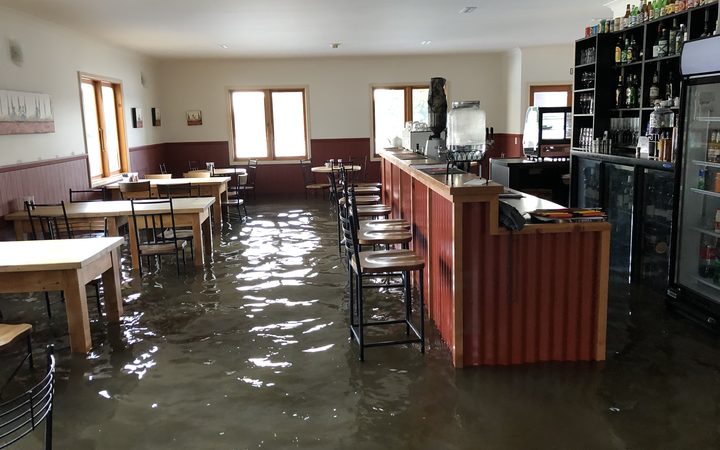 Floodwater in the Tap and Dough Bistro in Middlemarch earlier this week. Photo: Supplied via RNZ

On Tuesday, the Dunedin City Council said systems around the city area were coping as well as could be expected, considering the deluge.

But Mrs Emerson, who sits on the local community board, disagreed.

"That was PR talk. That was rubbish," she said.

"That might have been the case in other places, in other areas of Dunedin - it was certainly not the case here.

"I followed all the little news releases that were put out and I looked at it and thought what bulls*** are they talking because honestly what was happening here was disastrous."

She was not alone in her assessment and others were left wondering if the city-based council was concerned about the small outlying rural town.

One man, who did not want to be named, said his yard was contaminated with sewage and he had still not heard from the council two days later.

"Stormwater we can handle, but the sewage should not have happened," he said.

"They'll have to do something soon because if it happens again - this is the second time since I've been here that it's happened.

"No one has been around to see us and explain what's going to happen and the procedures, or how contaminated we are."

It was the second time in 14 months sewage had poured into the property.

His next-door neighbour was in the same boat, and had a toilet that had sat unflushed for two days now.

"The biggest problem is the sewerage still isn't working properly and we can't flush the toilet at this stage."

Down the road, Linda Mackenzie had to pile dirt on to her driveway to keep stormwater at bay.

It was a nerve-wracking time, she said.

"It was pouring down the street here. The drain over here was full to the top and it was pouring into the yard of the house.

"But it's primarily garden for us and we're not as badly affected as some people."

The floodwater came within a couple of metres of entering her house, she said.

Strath Taieri School closed its doors on Tuesday and opened late yesterday, while the state highway remained closed at Hyde, just out of the town.

The Dunedin City Council has been approached for comment.

With all this going on (flooding etc) the dcc still want to spend $20 million on a bridge.
Dcc needs their heads read.