Creek study given a boost 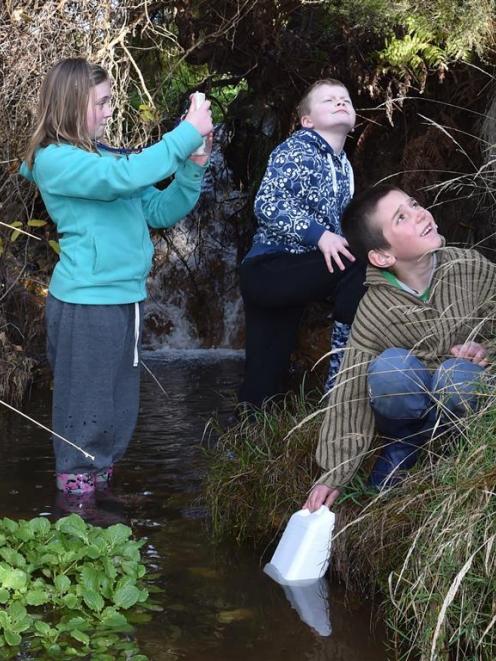 Broad Bay School pupils (from left) Amie Gordon (10), James Hurley (10) and Avi Douglas (7) are ankle deep in Smiths Creek during the beginning stages of their research project. Photo by Gregor Richardson.
A principal hopes to make green-minded "global citizens'' of his primary school pupils with the help of a recent grant.

Two Dunedin schools, Te Kura Kaupapa Maori O Otepoi and Broad Bay School, were among 19 primary schools who received a grant of up to $2000 from the Bayer Primary School Science Trust.

Grants are awarded to schools to help kick-start new environmental science-based projects, or enhance ones that are already under way.

Broad Bay School's principal Greg MacLeod applied for a $1991.50 grant in April to help finance a project "Understanding Our Environment'' which was approved, and the grant was received in May.

"I aim to teach the kids about participating as global citizens in the face of consumerism. [The project] is about making a difference and teaching the kids to care,'' said Mr MacLeod.

Instead of expanding classrooms, children should be getting out of them, Mr MacLeod said.

Pupils have been planting trees in nearby Smith Creek for "around five years'' as a part of their Smith Creek Conservation Project which they received a Toroa conservation award for last year.

They used the money from the grant to expand their new project: a longitudinal study of the health of Smiths Creek, looking into how weather patterns and the surrounding environment impact the creek and its inhabitants, the freshwater fish kokopu.

The project is about discovering if their planting had an impact on the creek. However, Mr MacLeod is not concerned about the research results and said the main goal was that the children get involved in a hands-on way and learn to care for their environment.

Collecting their own data and "read[ing] what's happening locally'' will give the pupils more of an incentive to get involved, Mr MacLeod said.

Broad Bay School is proud of its unique surroundings in Otago, and awakening concern for the environment within his pupils is very important to Mr MacLeod.

The school is on a "limited budget'' so the grant meant they could purchase specialised equipment needed for the project which included a stream monitoring kit, a weather station, two wind anemometers, a tripod and the accompanying software.

The information collected from the project will likely become part of a maths project involving data compilation, trend identification and a report.

"Maths can be challenging for kids to get into, [so] real life data may mean there is more of an incentive. It's just about getting the kids to care.''