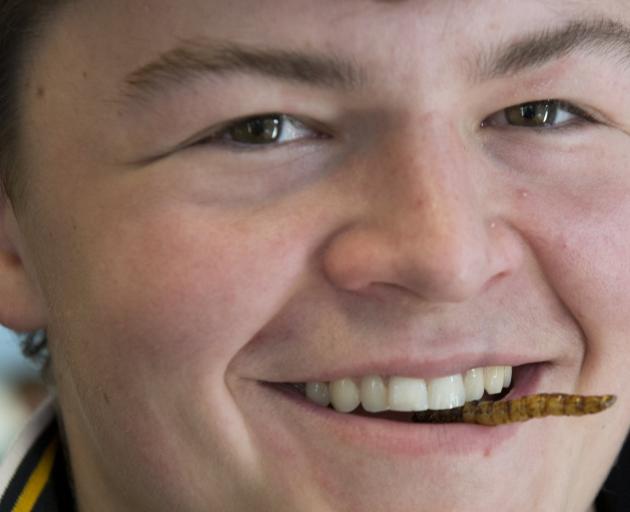 Chomping down on a mealworm at the Agribusiness alternative protein seminar yesterday is Tom Fowler, of John McGlashan College. PHOTOS: GERARD O’BRIEN
Slimy, crunchy and revolting were just some of the words used to describe the edible insects shared with Dunedin high school pupils at a seminar exploring alternative proteins.

Pupils of John McGlashan College, where the event took place yesterday, and Taieri College were spoken to about the nutritional and environmental value of eating insects.

He was considering adding the lightly salted crickets to his diet, but the teriyaki mealworms and the escargot snails were not for him. 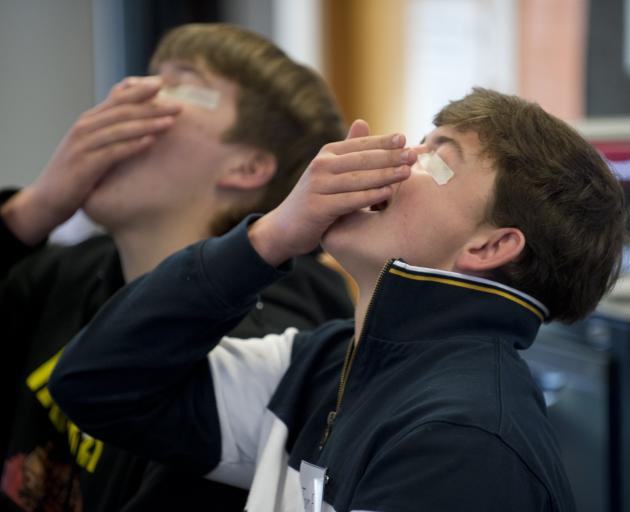 Trying their best in a blind insect eating challenge are Charles Engelbrecht (left) and Tom Fowler (both 17), of John McGlashan College.
He also sampled the scorpions, ants and locusts.

Tom was not quite ready to exchange his favourite cut of meat — a porterhouse steak — for the insects, but he could see how alternative proteins might become more normalised in the future.

Tom was also the winner of the blindfolded insect eating challenge, where pupils taped their eyes shut and tried to keep a straight face while eating unknown bugs.

‘‘I just pretended it was nice food and it kind of worked.’’

Insects were already eaten in about 80% of countries around the world, he said. 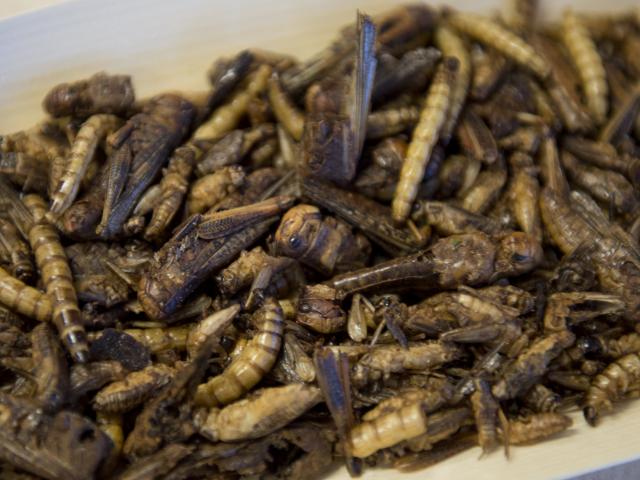 The environmental impact of growing insects was ‘‘minute’’ compared to beef and the amount of land needed was minimal.

The texture and the ‘‘yuck’’ factor kept the Western world from embracing the cuisine, but he hoped that would soon change.

He compared it to eating raw fish, which was unheard of until the 1990s but was now common.

He believed with the right promotion people would be more open to introducing alternative proteins into their diet.

Radical changes to the food system are needed to safeguard our food supply and combat malnutrition in the face of climate change, environmental degradation and epidemics, according to a recent report from Cambridge Uni.
Global malnutrition could be eradicated by farming foods including spirulina, chlorella, larvae of insects such as the house fly, mycoprotein (protein derived from fungi), and macro-algae such as sugar kelp.
Floods, frosts, droughts, dry spells, wildfires, viruses, pathogens and parasites all amplified by climate change put our current food systems at risk. To future-proof our food supply we need to integrate completely new ways of farming into the current system.
Two billion people experience food insecurity, including over 690 million people undernourished and 340 million children suffering micro-nutrient deficiencies.
We already have many disgusting and potentially unhealthy ingredients added to the foods we eat, particularly in processed foods so I have no doubt that soon we will be seeing these foods added to burgers, sausages nuggets and alike.

A bit of marketing is all that is needed.

But if, instead of being grilled, mealworms are spun to extract the good quality protein, then who among the fussy feeders will notice.

The deep problem, that nobody seems able to talk about is the seven billion people. Back in 'boomer' days this was recognised as an impending problem, now it is clearly among problems of which we do not speak. No matter the band aids we will destroy the world.