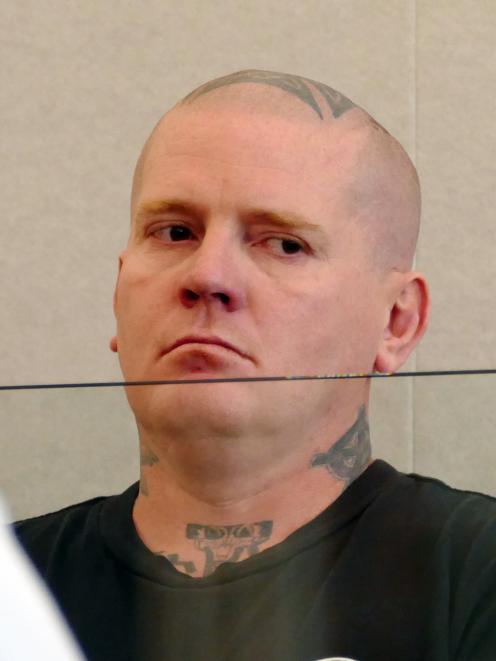 John McVicar (38) went back to watching television after stabbing his mother’s dog. PHOTO: ROB KIDD
A man who stabbed his mother’s dog in the neck then threatened to do the same to her has been jailed for 16 months.

John Royce McVicar (38) told police after the bloody incident on July 30 that he "wasn’t in a very good state of mind".

Counsel Brendan Stephenson said, while hard to reconcile with the events in question, his client professed his love for his mother and the dog.

And the feeling was mutual — from McVicar’s mother, at least.

She told the Otago Daily Times she had visited him in prison while he was on remand and she was confident there would be no repeat of the extreme violence.

The defendant appeared in the Dunedin District Court yesterday after pleading guilty to charges of ill-treating an animal and threatening to do grievous bodily harm.

Judge Michael Crosbie said offending against animals always attracted public attention because of "the importance pets play in the lives of many many people".

The court heard McVicar arrived home after a drinking session with friends at 10pm, ate a meal prepared by his mother then sat down to watch television.

He became "highly abusive" while his mother sat at a computer nearby with her dog.

She did not take care of the pet, McVicar alleged.

He would stab the animal then give her the same treatment, he said.

Moments later, McVicar followed through on the threat.

He went to the kitchen and armed himself with a knife from the bench while the victim yelled at him to leave the dog alone.

McVicar reached under the computer desk where the dog was cowering and stabbed it once in the neck, the court heard.

"I should do the same to you," he said as his mother shouted at him.

As his mother tended to the animal, which was bleeding profusely, McVicar threw the weapon into the kitchen sink then continued to watch television.

Judge Crosbie said the nonchalant response was probably symptomatic of the state McVicar was in at the time.

The dog — a female cross-breed called Sam — was treated by a vet and survived the attack, the court heard.

McVicar’s mother said Sam was skittish after the incident but had since returned to her loveable, gentle self.

The victim said her relationship with her son had also been repaired.

She put his outburst down to a range of frustrating family issues at the time.

However, defence counsel Brendan Stephenson said his client could not pinpoint the exact trigger for his decline.

"It was a day where he did fall apart," he said.

Mr Stephenson said McVicar had reported struggles with post-traumatic stress disorder but accepted there was no evidence before the court of that.

Judge Michael Crosbie noted the defendant had violence and firearms convictions in his criminal history as well as disorder charges from an early age.

McVicar — who was supported in court by his mother — was disqualified from owning an animal for five years.

The victim declined a protection order.