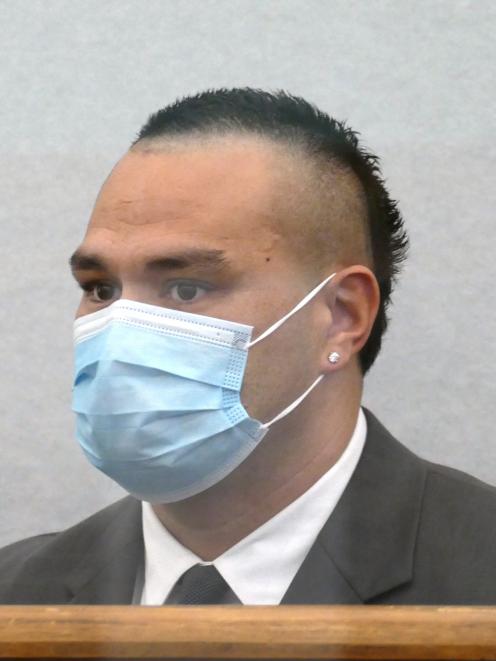 Pierre Rewi Anglem
An unrepentant “scary mobster” has been sent to prison for 12 years for a two hour Dunedin sex attack.

Pierre Rewi Anglem (42) appeared in the Dunedin District Court this afternoon for sentencing after being found guilty by a jury in April.

The defendant did not accept the verdict and was not remorseful for his crime that left the victim "significantly" impacted, the court heard.

Anglem faced four charges of unlawful sexual connection, two of rape, one of possessing an offensive weapon - an extendable hammer - and one of perverting the course of justice.

At the time of the sex attack, on August 27, 2020, Anglem was subject to a warrant after breaching parole by cutting off his bracelet.

Crown prosecutor Richard Smith said the victim did not know Anglem and found him "scary" from the start.

She had described him as a "scary mobster" to the jury.

She was told by a female friend that a mutual acquaintance was coming around and bringing his "cuz".

There was no sophisticated planning to the sexual offending, counsel Anne Stevens QC said.

The two men had "simply gone to visit".

The three smoked methamphetamine together.

However, the mutual acquaintance left unexpectedly, leaving the woman alone with the defendant whom she had not been introduced to by name.

"Almost immediately after [the acquaintance] left the address you produced what was described as a fold out hammer and twirled it, passed it from hand to hand," Judge Michael Turner said.

As Anglem moved it from hand to hand, he began to ask for sexual favours.

After she made a comment that the hammer looked dangerous, he put it away.

"She was a much smaller female against a much larger male who was armed," Mr Smith said.

Terrified she would be hurt if she did not comply, she performed oral sex on him.

"She hoped that in doing so you would then leave the address," the court heard.

"She struggled to breath and told you that repeatedly. Your response was to grab her by the hair".

Anglem subsequently picked her up and walked her towards the bedroom, but she put her hands on the door frame to stop from going in.

It was there the first rape happened.

Physically overpowered and “frozen”, the victim was forced into the bedroom and endured what she described to the jury as two hours of “half-torture, half-rape”.

The victim was slapped and spat on, and chunks of her hair were pulled out.

The incident only stopped when the mutual acquaintance returned.

Anglem was arrested on November 11 the same year, after the woman identified him from a police photo montage.

Semen found at the scene in a clump of her pulled-out hair was analysed by ESR forensic scientist Wendy James in the aftermath.

The evidence was three thousand million times more likely to be Anglem’s than anyone else’s, she said.

However, unaware of any DNA evidence, Anglem wrote a note for his aunt when she visited him at Christchurch men’s prison on November 25.

The note instructed his cousin to say he was with her that night, but it was confiscated before his aunt left the prison.

"The defendant, a stranger to the victim, endeavoured to put himself in a different location," the court heard.

Mrs Stevens said Anglem's childhood was "ghastly" and it was "hard to imagine a life as awful as Mr Anglem's was as a child".

While Judge Turner acknowledged Anglem's troubled childhood, it did not excuse the offending completely.

"You treated this victim as an object, not caring what she thought or wanted," he said.

The judge noted Anglem's desire to stay in the gang and denial of the offending meant his rehabilitation prospects were low.