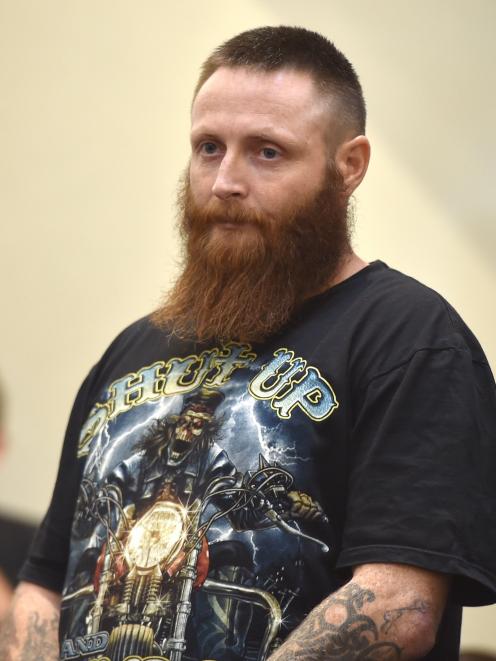 John Collins.
A man accused of a cricket bat murder said he only attacked the victim because he felt his life was under threat.

John Kenneth Collins (39) has spent the week on trial in the High Court at Dunedin and yesterday the jury heard from him for the first time.

He was arrested by police in Rotorua on February 20, 2019 — more than two weeks after killing 45-year-old Brent Andrew Bacon — and was subsequently interviewed by police about the incident.

Detective Dave Checketts asked him what he knew.

"Well, he basically flipped out on me and I hit him with the bat and that was it," Collins said.

Over the next two hours he elaborated.

The defendant and his partner, 32-year-old Aleisha Dawson, had met Mr Bacon while living at a night shelter in Christchurch.

Collins, originally from Hawkes Bay, said they had fled the North Island to evade gangs.

They had reconnected with Mr Bacon in Dunedin and the trio had used methamphetamine and cannabis, he said.

He considered the victim an associate more than a mate, Collins said.

They had had "heaps of arguments", the defendant told Det Checketts.

"Just like, ‘Mate, pull your head in’ and ‘Well, you’re starting to do my head in man and I’m gonna end up beating you up soon’," Collins said.

Mr Bacon had complained about someone following him but Collins did not believe it, he said.

While at the couple’s Lock St unit, Collins said as much and Mr Bacon flew into a rage, he said.

"I’ve seen him pissed off ... but never like that," Collins said.

"I wouldn’t have done anything if my life didn’t feel threatened."

How hard did he swing the cricket bat?

Collins later told Det Checketts he was not intending to strike Mr Bacon.

He described the victim hitting the ground and lying face down on the floor of the lounge.

Then he struck again.

"So what made you hit him again?" the officer said.

"I think it was the whole fact that I hit him the first time and I just s... my pants ... and then yeah, just panicked ... no basic thoughts really," Collins said.

"Did you wanna finish him off?"

"Nah, I didn’t but I dunno. It just happened. I felt that if he had have got back up he would have come back at me again."

Collins said he "blanked out" after that, but he recalled cramming Mr Bacon’s body into a sleeping bag, putting him over his shoulder and throwing him in the back of the victim’s Toyota people mover.

He told police he picked up Dawson, who had been away from the house at the time, and then dumped the body beside a gravel road 35km north of the city while she was asleep in the passenger seat.

Collins said he knew he would be caught but went on the run to "have a blow-out and have fun".

Earlier, the court heard from pathologist Dr Charles Glenn, who gave evidence about a large hole smashed in Mr Bacon’s skull stretching from his eye socket to the back of his head.

Crown prosecutor Richard Smith asked the pathologist to comment on the force required to cause such damage.

"We routinely see displaced fragmentation of the skull in motor vehicle accidents or a plane crash, or a fall from some distance."

Rather than two blows, suggested by counsel Len Andersen QC, he believed there were a minimum of three — two to the head and one to the neck.

In his experience, the major "gaping defect" to the side of the skull was probably the result of multiple strikes, rather than one, as the defence proposed.

Fractures to Mr Bacon’s fingers may have been defensive injuries, the medical witnesses concluded, but they could not rule out any of the damage being caused after death.

The Crown’s evidence is expected to conclude today.