'I'm going to get you': Jailed for boarding house stabbing 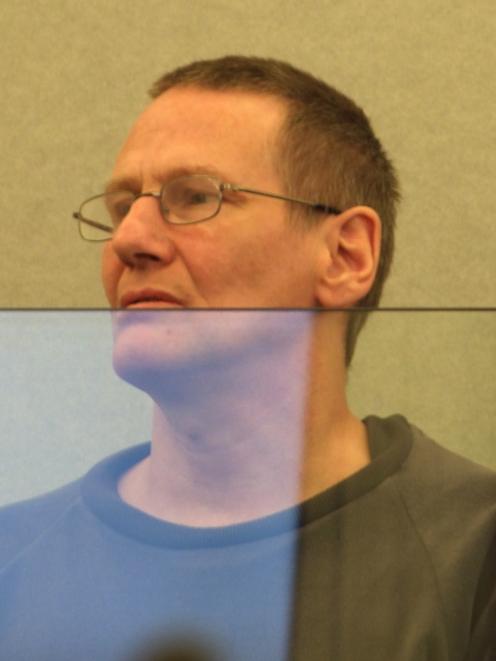 Thomas Jenkins (50) stabbed a man with whom he was living in shared accommodation. Photo: Rob Kidd
After coming off second best in a boarding house scuffle Thomas Leslie Evan Jenkins sought immediate retribution.

The 50-year-old, who appeared in the Dunedin District Court yesterday, had been living in shared accommodation in the suburb of Clyde Hill.

On the evening of December 16, Jenkins went into another man's room and accused him of making offensive remarks.

The argument swiftly became physical, ''the two pushing each other with the [victim] swinging the defendant to the floor'', police said.

The other man let Jenkins up once he had been assured the grievance had been settled.

But it was not.

Five minutes later, Jenkins was kicking at the victim's door, yelling and swearing at him.

He was armed with a knife.

A woman opened the door and Jenkins brushed her aside to get to his target.

''I'm going to get you,'' he said, along with a string of profanities.

Jenkins swung the knife in a downward motion, stabbing the victim in his left shoulder near his neck, the court was told.

Despite having inflicted a wound, the defendant continued to slash away at the resident.

The victim received another wound on his left hand as he tried to protect himself and one on his armpit.

Though the victim was seriously injured, he overpowered Jenkins and restrained him while emergency services were called.

His wounds required weeks of treatment and Crown prosecutor Craig Power said the emotional fallout had also been immense.

The 57-year-old had been diagnosed with post-traumatic stress disorder and was taking medication to cope with the psychological strain.

The victim said he continued to relive the events and suffered regular nightmares.

He likened what Jenkins did to ''sticking a pig'' and there was doubt he would ever make a full physical recovery from his injuries.

''He says that he could feel the blade cut into his muscles,'' Judge Phillips said.

''He must have been horrified and traumatised by it all.''

''You were within a hair's breadth ... of someone much more elevated than I, in a courtroom down the corridor, sentencing you to life imprisonment,'' the judge said.

Jenkins had previously received a first-strike warning under the three-strikes legislation after being convicted of wounding with intent to do grievous bodily harm.