A man who rammed a police car and chased an officer with an axe has made only "limited progress" while locked up. 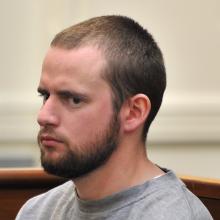 Ruairi Taylor.
Ruairi Kern Taylor (27) is one of only a handful of inmates in the Auckland-based Prisoners of Extreme Risk Unit (PERU), which was designed especially for those with "extremist views" following Brenton Tarrant’s shooting spree in Christchurch in 2019.

At a parole hearing last month, the board heard Taylor was deemed unsuitable for standard rehabilitative programmes.

Instead he was undergoing one-on-one sessions with a psychologist, treatment which had been stymied by Covid-19.

"He has found individual psychological therapy to be beneficial, although it is noted that he has an entrenched personality and poses challenges and that only limited progress has been made to date," panel convener Judge Charles Blackie said.

On September 4, 2019, Taylor quit his job in Tapanui, bought a tomahawk in Gore, strapped a knife to his leg and drove off in his Subaru, looking for police.

He found Constable Steven Treloar sitting in his patrol vehicle after having pulled over a motorist.

The defendant blasted "religious music" on his stereo and slammed into the back of the officer’s stationary car before chasing the terrified officer with the axe, shouting "Allahu akbar".

Police found Taylor beside the patrol car, wearing a police hat and jacket, yelling excerpts from the Koran.

He later told a Corrections employee he had planned to decapitate his victim and wave the head around so he would be shot by other officers.

Taylor had spent nine months in the PERU, and the Parole Board said the plan was to transfer him back to the Otago Corrections Facility to continue his counselling.

"From then on, and while progressing towards his sentence end date, he will need a multi-agency approach including psychological services, forensic and community mental health services, and alcohol and drug rehabilitation services," Judge Blackie said.

Taylor will see the Parole Board again in October, two months before his sentence expires.