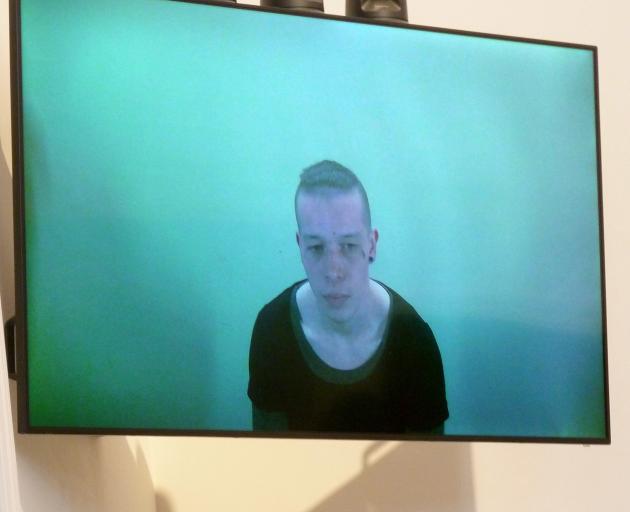 Zachary Hamilton-Wright at sentencing by audio visual link in the Dunedin District Court. PHOTO: STAFF PHOTOGRAPHER
A knife he poked at his partner became embedded after penetrating the upper area of her left forearm and being partly caught by her clothing, the court learned at the sentencing of a 23-year-old man.

Fortunately, the wound was minor. But it did require hospital treatment, Judge John Macdonald said sentencing Zachary Hamilton-Wright for violence against the victim, between May 2017 and December last year.

Hamilton-Wright was before the Dunedin District Court, by audio visual link, last week convicted of one charge from the knife incident - wounding the victim with intent to injure her, on December 1 last year.

Given an overall sentence of two years' jail, he is also to pay $200 reparation relating to the bracelet.

Six months' release conditions include the requirement to be subject to GPS monitoring. Also, the judge made a protection order in favour of the victim.

The fact summary said a relationship of about two years between Hamilton-Wright and the victim resulted in them living together.

On the night of the wounding offence, they had been arguing.

Hamilton-Wright did not like what the victim had prepared to eat. She cooked further food to placate him and then retreated to a bedroom.

Hamilton-Wright got a knife from the kitchen and then approached the victim in the bedroom, with the knife (a serrated steak knife or a thin-bladed utility knife) out in front of him.

He poked the knife forward at the victim, striking her in the upper part of her left forearm.

The knife remained embedded, being caught partly by the victim's clothing and by having penetrated her arm.

The victim pulled the knife out and threw it away.

A third person present in the room collected the knife and retained it to keep it away from Hamilton-Wright.

The victim left the room, bleeding from the wound, and ran from the house.

Hamilton-Wright caught up with her and remained with her for the rest of the night and into the next day.

The victim received a small penetrating wound to her left forearm. It required treatment at Dunedin Hospital.

Spoken to by police, Hamilton-right stated he only meant to get the victim's attention after an argument. He had not realised the knife had touched her skin.

The victim may have cut herself when she removed the knife from her clothing, he stated.

Public defender Andrew Dawson said restorative justice did not go ahead but Hamilton-Wright had been willing to attend.

He had written a letter of apology in lieu.

The judge noted that in custody on remand Hamilton-Wright had done his best and actively participated in programmes.