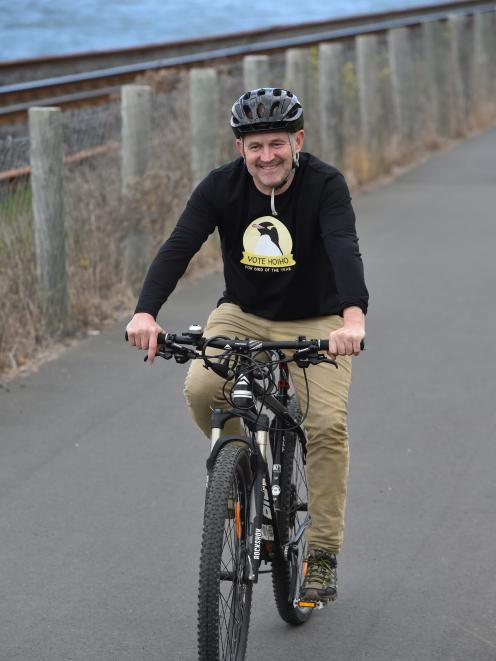 Steve Walker says confirmation that work to complete the State Highway 88 shared path to Port Chalmers is set to begin is "great news''. Photo: Gregor Richardson
Completion of the shared path to Port Chalmers will help create ‘‘one of the world’s great cycle and walkways’’ in Dunedin, one of the project’s main backers claims. Chris Morris reports.

The NZ Transport Agency yesterday confirmed that a $25million contract to complete the State Highway 88 cyclist and pedestrian shared path had been awarded to Downer NZ Ltd.

Initial work on the final stage - a 5km section between St Leonards and Port Chalmers - was expected to begin before Christmas and grow from next year, resulting in a 3m-wide path with lighting along its length.

Dunedin Mayor-elect Aaron Hawkins was quick to welcome the announcement yesterday, saying the ''eagerly anticipated'' project would provide a ''really important link'' between Port Chalmers and the city centre.

''The facility is wildly popular as far as St Leonards, and this final stage is eagerly anticipated.

''Providing safer walking and cycling options is a key priority for Dunedin.

''As a resident of Port Chalmers, I'm well aware what a difference a completed shared path will make for all road users,'' he said.

Former West Harbour Community Board chairman Steve Walker - who has just been elected a Dunedin city councillor - was also delighted by yesterday's announcement.

Mr Walker, who was among the most vocal advocates for the project as board chairman, said he had been pushing for the shared pathway to be built for 15 years.

To see the final step confirmed left him breathing ''a huge, fantastic, sigh of relief'' yesterday, he said.

''It's the reason I got into local politics in the first place.

''It's great news for the hundreds and hundreds of people over the years who have supported this and worked so hard to get it to completion,'' he said.

The project would improve safety for pedestrians, cyclists and road users alike, but would also benefit cruise ship passengers who often walked along the highway to the city, he said.

Once completed, the SH88 path would link to the city and the Peninsula Connection project on Otago Peninsula, creating what could be ''one of the world's great cycle and walkways'', Mr Walker said.

It could even encourage new bike rental tourist ventures to flourish, as cruise ship passengers rented cycles from Port Chalmers, rode the route to Portobello and crossed back to Port Chalmers on a ferry service, he said.

The final 5km stage to Port Chalmers was the most complex section and would include a 610m-long board walk - together with a viewing platform - running adjacent to the historic sea wall at Blanket Bay, NZTA senior project manager Jason Forbes said.

Reclamation would be needed closer to Roseneath to allow the shared path to climb up to the highway, where it would pass through the cutting on top of a new retaining wall, decorated with artwork, he said.

More than 2.5km of railway would also need to be shifted, between St Leonards and Curles Point and between Sawyers Bay and Port Chalmers, to provide space for the path, he said.

Reclaimed areas could also take up to a year to settle, before they could be built on.

At Sawyers Bay, two new pedestrian refuge islands would be added to help pedestrians and cyclists cross the road safely.

Safety improvements - including new safety barriers - were also planned along SH88 as part of the work.

Mr Harland said the project represented a ''major milestone'' for Dunedin and a major road safety investment by NZTA.

''Many people in the local community and across Dunedin will be thrilled that the final link in this shared walking and cycling path is about to begin,'' Mr Harland said.