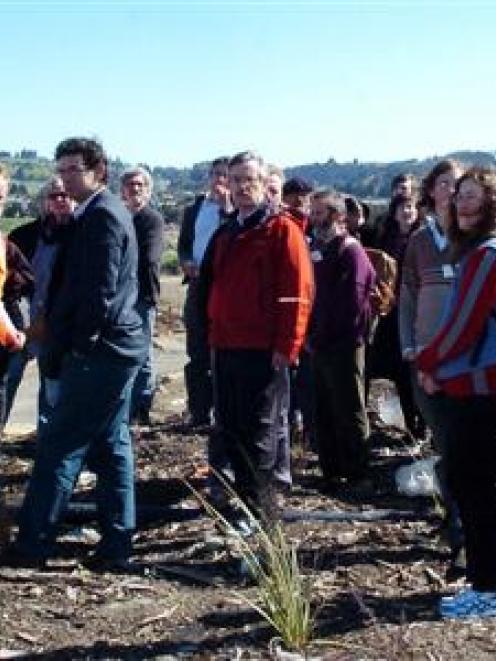 Delta Utilities landfill engineer and organic supplies manager Dave Hanan (in visibility vest) leads a group around the Green Island Landfill on Saturday as a part of The Next Step - Waste as a Resource workshop. Photo by Gerard O'Brien.
Major Dunedin buildings such as the town hall, central library, Moana Pool, Regent Theatre and railway station could be heated using renewable woodchip fuel, one of many ideas put forward by Dunedin City Council energy manager Neville Auton at a workshop on Saturday.

The workshop, called The Next Step - Waste As A Resource, allowed members of the public to hear scientists, business people and educators speak about opportunities for developing waste into a resource.

The aim of the workshop was to get people to take action in their own lives.

Mr Auton, who stressed his ideas were his own and had not been approved by council staff or councillors, said methane gas, which is currently piped out of the Green Island Landfill and burnt to produce less harmful carbon dioxide, could instead be used to make "bio coal", electricity and low temperature hot water.

Bio coal was essentially woodchips from managed forests heated at a high temperature, using the exhaust from the methane gas and without oxygen, to make waterproof woodchips.

The chips could then be used in place of LPG in boilers which supply Dunedin's major buildings.

Other suggestions were creating micro hydro stations from water facilities such as the water that flowed from the Mt Grand Treatment Station to Ross Creek Reservoir; wind turbines to power our city's street lights, and tidal generation in the Otago Harbour.

At Moana Pool alone, using "bio coal" could save at least $370,000 a year, after repaying an initial capital cost of $1.3 million.

Mr Auton said all his ideas would need detailed feasibility studies, but could potentially save the city millions of dollars, as well as providing renewable energy sources.

The city's forests in particular were an "extremely" valuable resource.

The workshop included a trip to the Green Island Landfill to see the methane gas pipes, as well as look at green waste recycling and hazardous material disposal.

A "business for change" group has now been established to facilitate discussion, and it will meet on Wednesday, October 28, at the Otago Polytechnic.