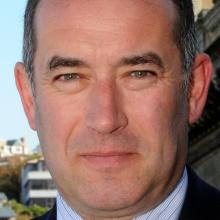 Grant McKenzie.
The departure of the Dunedin City Council’s group chief financial officer, Grant McKenzie, has triggered a minor reshuffle within the organisation.

The rejig includes a temporary structure while Mr McKenzie’s replacement is recruited, but the council has also taken the opportunity to realign job titles and responsibilities for two of the council’s senior managers.