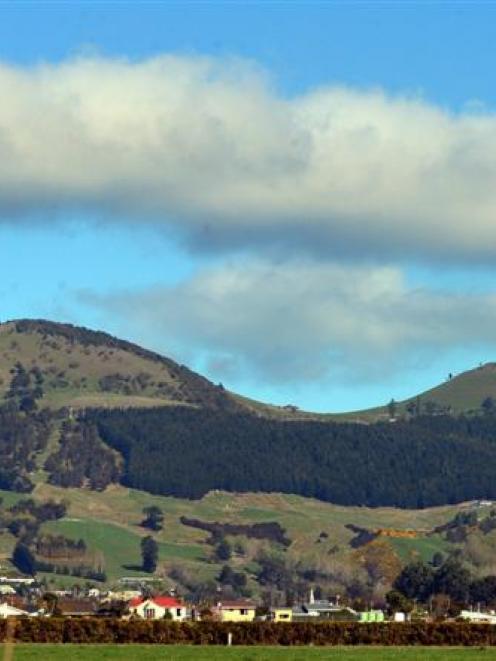 Saddle Hill. Photo ODT
The company behind quarrying on Saddle Hill is questioning whether it has been given a fair trial by the Environment Court.

The issue was brought up in the High Court at Dunedin yesterday as Saddle Views Estate sought a stay in proceedings while it appeals an interim decision made by Judge Jon Jackson in the Environment Court last month.

That decision suggested a 1960 consent for quarrying on the lower of Saddle Hill's two humps, Jaffray Hill, "has no ongoing effect'' and work should have ceased over 50 years ago.

Yesterday's proceedings were the latest in the company's protracted dispute with the Dunedin City Council over quarrying on Saddle Hill.

In arguing for a stay, Saddle Views Estate counsel Trevor Shiels QC said it would be more convenient for the High Court to deal with the appeal now rather than when the Environment Court issued its final decision.

Mr Shiels argued that the interim decision contained an "error of law'' and meant it was now "facing a case made by the Environ-
ment Court, not by the city''.

He also questioned whether his client could get a fair trial.

If the appeal was not dealt with by the High Court he was "duty-bound'' to file a "formal challenge'' over bias after accepting advice from his client.

Despite the decision being an interim one, there was a perception from the council the case was already "done and dusted''.

Council counsel Michael Garbett said it was better to wait for the final decision. Otherwise Saddle Views Estate could appeal the interim decision and then go through the same process again with the final decision, he said.

Justice Rachel Dunningham, who reserved her decision, said the arguments being made now were effectively "shadow boxing'' ahead of a final decision.

The question came down to whether appealing the interim decision was the "convenient and efficient'' way to go about it.

Mr Shiels earlier went over some of the "long history'' of litigation between the company and the council, including an "extraordinary delay'' of 12 months before Judge Jackson released his interim decision.