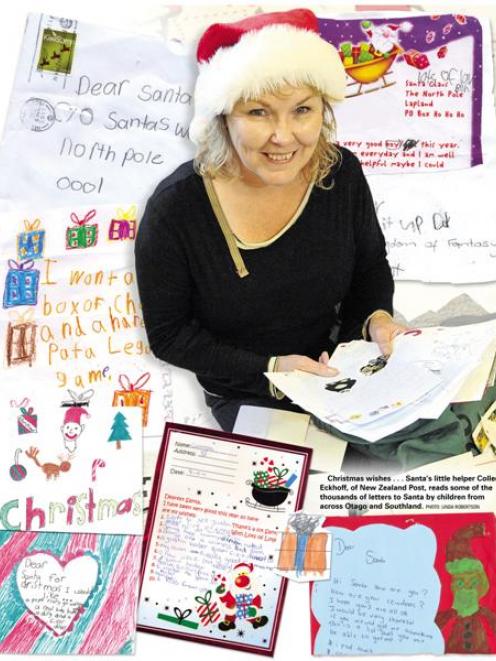 Santa's little helper Colleen Eckhoff, of New Zealand Post, reads someof the thousands of letters to Santa by children from across Otago and Southland. Photo by Linda Robertson.
He makes a list, he checks it twice, and Otago children have tried very hard to make sure Santa puts them on the nice side of it this year.

Dreading lumps of coal in their Christmasstocking, and with loftier ideas of iPads and ponies, children from across the region have beenbusy penning their wishes, and some explanations, to the man in red.

Ellie Constantine delved into the secret world of Santa letters.

Children can be very polite when they want something. They can also be very honest.

Santa received about 8500 letters from Otago and Southland children this year, each withvarying requests and introductions.

While most went for the simple "Dear Santa", others were more vague "To noth Plow", orpersonal "To my best frend Santer", "Hello there Old Chum", and "Has Mrs Claus been verygood at cooking? Is it cold is it warm or is it just right?".

One, though, seemed more in on the game than others "Dear Mum and Dad I love you". The next common step was to assure Santa they had been good.

"I have been trying my best to be good because I've been letting people go in front of me onthe bus."

"I have been very good. This is what I did I cleaned my teeth. I cleanened my bed room. I atemy breakfat. Iv been nis to my sisters."

Others just wanted to butter him up.

"I think you are the best Santa ever and I love you."

"You are one of my favourite people in the world."

"I have been waiting patiently for you because you are my favourite person."

"I would like to be your helper and deliver presents."

"I'll make sure that I have the beer and cookies ready for you and I will not drink and eat themthis year."

"Is there anything you want or the reindeers want."

"I have been trying really hard to focus on my school work so I just ask for some gifts as areward."

"Thank you for the wonderfull presents last year even though thay wernt what I wanted butthay were better than them."

"You are cool. I like you. Your nice. Your the best person in the world. Your really good atmaking toys. Raindears Santa and elvs rock!"

And for some, there was just no beating around the bush.

"This year I admit I have been naughty but I have still been good too."

"I've been making a few mistakes but most of the time I've been good."

Standard requests for Lego, dolls, iPads and PSPs were intermingled with some cute, andbizarre, wishes.

"Can I please have a front tooth."

"I would like for Christmas my sister to disappear but I do love her so forget that."

"For Christmas I would really like to get a Nokia N9 so I can have own phone to talk to my friends with out being there with them but most importintly for my safety when I'm not with my parents."

"A tasmainian Devil that listens to me always."