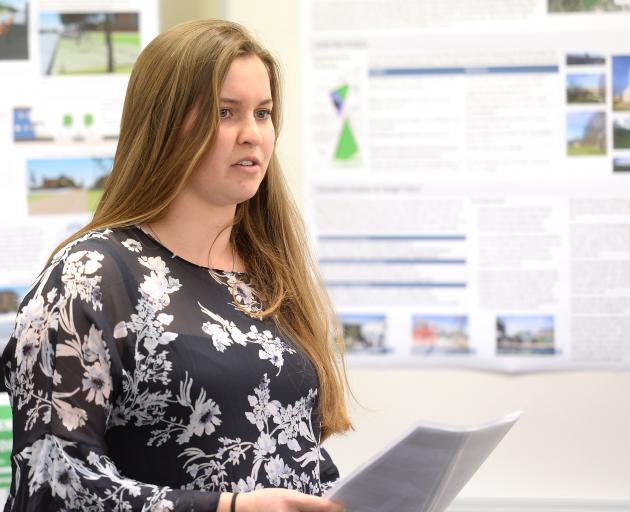 Surveying student Jess Smyth delivers her semester’s work on plans for a development to deal with Dunedin’s housing needs. Photo: Linda Robertson
Dunedin's next generation of surveyors took on the city’s housing problems yesterday in front of the very people who will have to help deal with those problems.

The slightly nervous fourth-year students did so in front of city councillors and members of the mayoral task force on housing, in part because Dr Filep said discussion on the issue needed to be in public. The students were given a hypothetical site on Market Reserve and the northern tip of the Oval to design their housing development.

They came up with ideas from pedestrianising Princes St to including community gardens,  laneways and plazas in their designs.

Their work was the culmination of a semester-long project. Dr Filep said the "politically sensitive" site was chosen as a learning tool to develop an understanding of the trade-offs required in dealing with limited space.

She said having councillors and housing task force members attending gave the students a real-world audience, but also opened up the conversation the city needed to deal with its housing needs.

"The community is ultimately the primary stakeholder. The sooner these conversations become more public and more inclusive the better."

Dr Filep said she was pleased with the way her students  incorporated public space and green space into their designs.

Some had chosen not to develop on the Oval part of the site at all.

"I was impressed by that choice."

Housing task force chairman Cr Aaron Hawkins, who attended the event, said the city was fortunate to have the university as "an ideas factory".

He said it was good to see the students thinking about higher density housing.