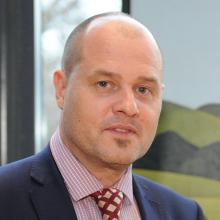 Cam McCracken
The director of Dunedin's art gallery has taken two more institutions under his wing, after being named director of the Toitu Otago Settlers Museum and the Dunedin Chinese Garden.

Today that was made official.

Mr Dixon said at one stage it was thought Toitu would retain its own director post, but over the past year it became apparent the roles could be combined.

Having integrated leadership across city museums and galleries was nothing new, and happened internationally.

Staff had worked with the Otago Settlers Association and the Dunedin Chinese Gardens Trust, and those organisations had been advised of the decision to have a combined leadership post.

Mr McCracken, who has been art gallery director since 2012, said he was delighted to take on what he described as a challenging role.

Closer integration would allow the institutions to make an even stronger contribution to Dunedin's development.