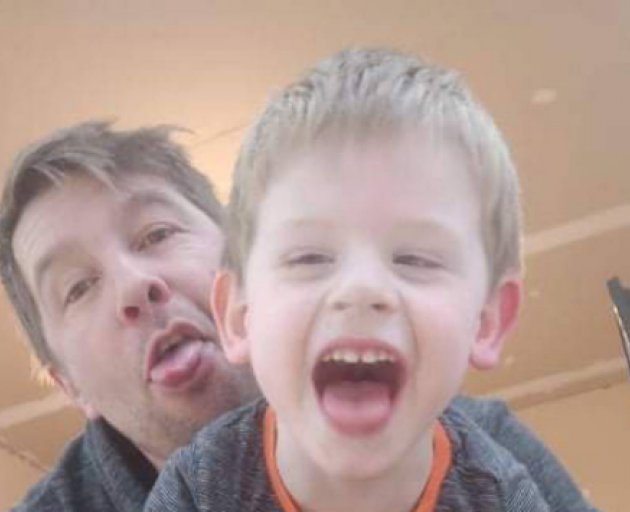 Partner Kristin Burt likened his daily vomiting to that of a woman experiencing morning sickness.

By December, he was having a CT scan and just before Christmas was told he had five tumours, and only had a few months to live.

Not only that, prior to his diagnosis, Burt's 4-year-old son, Harrison Carter, had surgery for a tethered spine after telling his grandmother that he couldn't feel his legs.

Harrison was diagnosed with cerebral palsy at birth and the family knew that he was at risk of developing a tethered spine - where it attaches to somewhere else in the spinal column as opposed to being free.

Knowing that was a symptom of cerebral palsy, Burt took him to the neurosurgeon at the end of August and the youngster was booked in for surgery 10 days later.

Two weeks later he developed a bad infection and was helicoptered to Christchurch Hospital.

Meanwhile, Keen had still been experiencing his vomiting, seen his doctor and been given medication to try to stop it.

One day in September, Burt got a phone call from him to say he'd crashed her car.

"The neurosurgeons are now saying ... that it was probably a seizure."

The only time Keen had come close to anything cancerous was when he had abnormal melanoma cells cut out from behind his ear in 2014.

"The surgical report was that there was a clear margin around that and it was just abnormal cells, it wasn't melanoma."

However, it appeared a cell must have escaped the incision and been growing around his body.

"So he lost his licence due to an unexplained blackout and was made redundant because he couldn't drive."

He had still been experiencing blurry vision and headaches and ended up back at his GP in early December, when he was referred to the neurosurgeon.

Upon arriving back to his mother's house, he was told to get to the emergency department as soon as possible.

They found the five tumours; two in his brain, one in his lung, kidney and back.

On Friday, Keen began his six-weekly immunotherapy in Christchurch and he would also have localised radiation for his brain tumours.

"There's a 20 per cent chance that treatment will work, otherwise he's only got a few months left."

However, with Keen out of a job and Burt only working 30 hours a week, money was tight.

"Because I haven't been at my job a year yet, I've got no leave and I used all my sick leave with Harrison."

Keen had been surviving on the Covid-19 wage relief but that was now due to run out and the reason why Burt's sister, Leanne Ludlow, had set up a Givealittle page to help the family get through the next few months.

Burt said with all the medical expenses now she struggles to see how they would get through.

However, to give them something positive to focus on, the couple have decided to get married on March 6.

"It's just something for us to look forward to."

Keen will have further scans of his tumours in six weeks and allow doctors to try to give a clearer estimate of how much time he has left.

*Anyone wishing to donate to the family can head to their Givealittle page here.