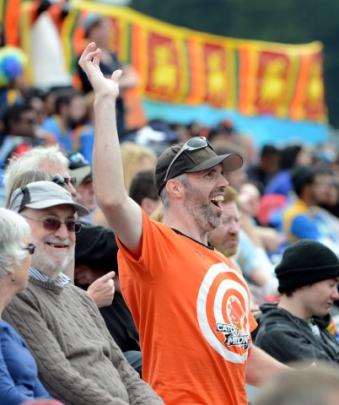 A cricket fan in Dunedin has today entered the running to win a share of a prize pool which could reach $1 million by catching a six with one hand.

Jamie Gough, a 35-year-old physiotherapist from Dunedin, was watching Afghanistan play Sri Lanka at the University Oval in Dunedin when he nailed the catch to the rapturous cheers of those around him.

The catch is the third to qualify for Tui's Catch-A-Million campaign, which links the total prize pool to the Black Cap's success in the Cricket World Cup.

The prize pool is then shared among those who have executed a qualifying catch during the tournament.

The six was hit by Afghan batsman Asghar Stanikzai.

"He said he hasn't played cricket for a while and didn't know if he could catch one.

"He [thought] he'd be able to catch one because he was so high up in the stand."

Mr Gough is the third person to nail a qualifying catch.

In Wellington on Friday, Jason Bragg missed out on a share of the prize when Tui determined he had made a "fumble" when he caught a ball off a six from Brendon McCullum in the match against England.

Mr Gough said it was a "stupid chain" of events that led to the catch.

"We got given the tickets by my wife's friend, and then I was actually going to stay at home with our son and come down a bit later because I got to go to the Scotland game alone because my wife couldn't get off work.

"I said, 'You go first and I will bring the wee guy down later.' She said, 'No you go and try and catch the ball. If you catch it we can have another wedding.'

"We had basically just got in and sat down. I said to my daughter, 'We're actually quite far back here, I don't know if we will get one up here.'

"It must have been the first ball I paid attention to about 30 seconds later. I remember thinking, 'That's coming in our direction, actually that's coming right at me.'

"I was actually quite lucky because there was quite a lot of space around me. I moved to my left so I could use my right hand. When it was about 10m away, I was thinking, 'Oh my God, don't drop it'."