Dunedin is still the most Covid-protected district in the country, and other southern areas are also high on the list.

The latest data from the Ministry of Health shows, as of this morning, 76.9 percent of eligible people in Dunedin are fully vaccinated. That is compared with 72.2 percent on Friday. Another 13.8 percent have had a single dose.

The Queenstown-Lakes District is in second place after a five-place jump, with 74.3 percent fully vaccinated and a further 20.5 percent having had one dose. 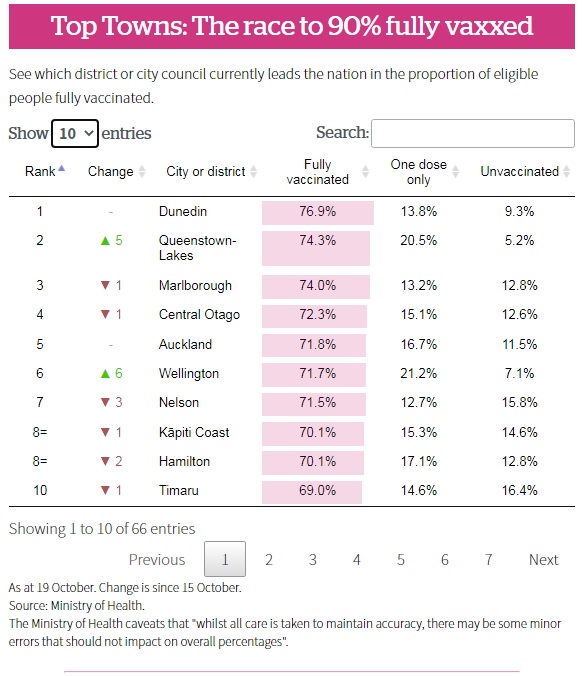 Central Otago is fourth on 72.3 percent double-dosed, with 15.1 percent having had one shot.

Elsewhere, Wellington has climbed six places since Friday and now sits in sixth place with 71.7 per cent.

Hamilton City has dropped back two places after a surge in vaccinations saw them sitting in sixth place, just behind Auckland on Friday.

The city and its surroundings were forced into a snap level 3 lockdown on October 3 after positive cases were detected there. It is now in 8th equal with the Kapiti Coast.

Auckland continues to hold its fifth-place position with 71.8 per cent of its population now fully vaccinated.

The Tasman District is back into the top 10 after a strong start saw them comfortably in sixth place until recently.

The biggest mover was the Grey District on the West Coast, which jumped 18 places and now sits in 36th equal.

The data comes after the Super Saturday event which the Government hoped would bolster vaccination rates around the country, and in which more than 130,000 jabs were given across the country.