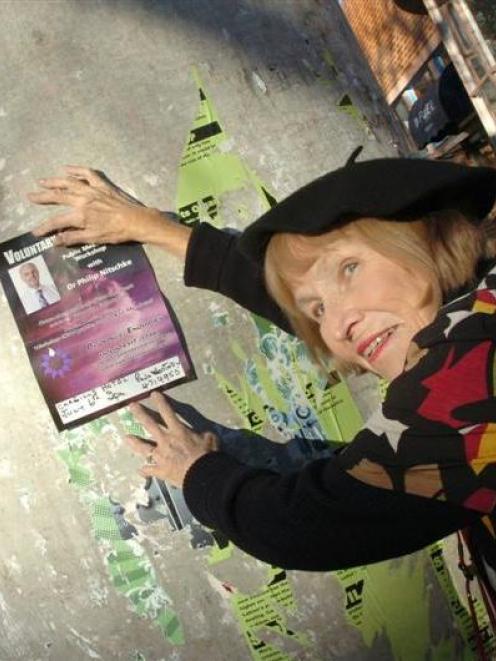 Paula Westoby, Exit International chapter leader, places posters at the Otago University in this file photo.
At 79, Dunedin woman Paula Westoby wants doctors and medical emergency workers to be under no illusions about what to do if she has a stroke or heart attack.

Today Ms Westoby will become one of the oldest people in the country to be tattooed when she has the words 'Do not resuscitate" tattooed on her chest.

Ms Westoby, the Dunedin coordinator of the euthanasia group Exit, said she wanted to die with dignity and when she decided.

She told NZPA she was excited and nervous about being tattooed but it was also part of the campaign to change the law to allow people to choose when they died.

About two years ago she met a woman, also about 80, who had had the words tattooed on her chest when she was only 21.

"I thought what a bloody good idea.

"If I have a heart attack in the streets I do not want to be revived."

She wanted to see the law changed in New Zealand to give people that choice, but said it would not happen "in her lifetime."

She said it was ridiculous that if someone helped take the cap off a pill bottle because she was incapable, that person could be charged if she took the pills and died.

"If I can't turn it (the pill bottle cap) because I have got arthritis so badly and I have got a pill I know will kill me, I want to be able to do it."

She said her euthanasia group got little support from the people of Dunedin.

They were "retarded" over the issue because the University of Otago and the medical profession were scared of the ethics of it and refused to support it.

Although Dunedin was a university town, the medical and legal fraternities were "putting it (euthanasia) down because they were frightened to say anything positively in favour," she said.

She also said for many years doctors had been helping very sick and terminally ill people to die but none would admit to it.