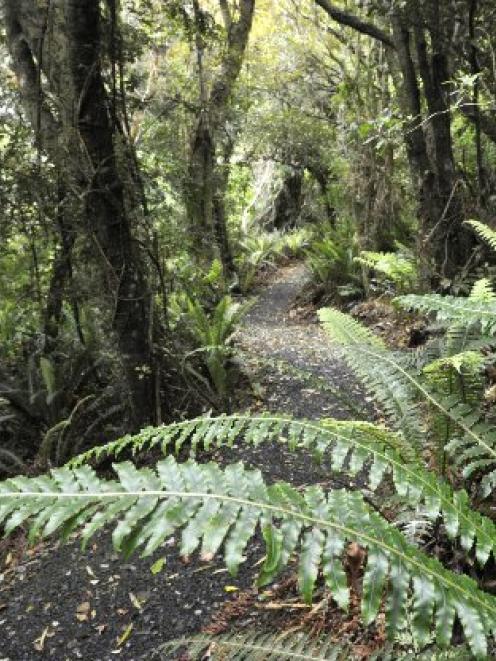 The recently completed Orokonui Ecosanctuary loop track sponsored by the Otago Regional Council. Photo by Gerard O'Brien.
One year on from its grand opening, Orokonui Ecosanctuary is on track to meet its targets for translocations, income, education and visitor numbers, operations manager Chris Baillie says.

The opening of its $2.3 million visitor centre last year was a significant milestone for the Otago Natural History Trust which had spent decades planning and fundraising to make the ecosanctuary a reality.

The visitor centre is the gateway to the enclosure, surrounded by a 2m-high, $2 million pest exclusion fence, where six species have been returned as part of the trust's aim to return the 307ha to what it may have looked like centuries ago.

With a "half million operational budget" and 5.5 full-time equivalent staff, it was an economical operation.

Ms Baillie said the ecosanctuary was progressing at a "galloping pace".

With about 5260 visitors in 12 months and 2200 pupils taking part in its education programme, they were "one-third" of the way towards the 2012 target of 25,000 visitors to make the facility self-sufficient.

"We expected it to gradually increase as we do the marketing and introduce more species."

About 28% of the ecosanctuary's income was from visitor spend and the rest came from the Dunedin City Council, biodiversity funds, bequests, trust memberships and business sponsorship.

Numbers were boosted when species were introduced, such as the eight Haast tokoeka in October, she said.

"It would nice to get at least one cruise-ship visit this year."

As well as the translocations of robins, saddlebacks, jewelled geckos and kiwi in the past year, they had also finished the Otago Regional Council-sponsored Rimu loop track (a 40-minute to one-hour easy grade track) and the 3km valley track down to the tallest tree had been gravelled.

Eels had been introduced to a small natural pond along the loop track and new interpretive panels were being developed.

Another busy year was expected, with plans to begin night or twilight tours in the new year, possibly bring the Department of Conservation's kakapo Sirocco to the ecosanctuary and other translocations of kiwi, saddleback and possibly even takahe to look forward to, he said.