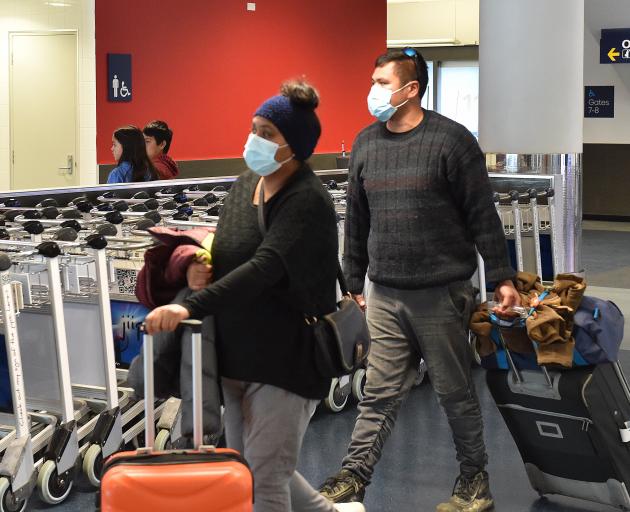 Although Air New Zealand and Jetstar would not say how many passengers they had flown from Auckland to Dunedin, Invercargill and Queenstown airports since travel restrictions came into effect on Wednesday, both airlines said there had been a "significant" fall in the numbers flying south.

Under Covid-19 Alert Level 3, travel to and from Auckland must be for essential reasons only.

That was borne out by what Otago Daily Times reporters saw at the southern airports yesterday.

At Dunedin Airport, a Whangarei man who did not want to be named said there were only about 20 passengers on his Jetstar flight.

He was visiting the city to see his girlfriend, and to be in a "safer" place for a week or two in case travel restrictions were tightened further.

The passengers on his flight had been given masks and their seats were distanced, he said.

A similar number of passengers were on an earlier Air New Zealand flight.

At Queenstown Airport, Wanaka resident Mark Desmond said he was returning from a business trip and had been the only passenger on his Jetstar flight.

"It felt a bit odd when I was sitting at the airport — I was the only person in the departure lounge," Mr Desmond said.

Only people with a valid ticket were allowed to enter Auckland Airport’s domestic terminal, and he had shown a power bill to Aviation Security Service (Avsec) staff as evidence of his name and home address.

United States national Michael Collenberg said he had just spent two weeks in managed isolation in Auckland, and had an exemption to work as an engineer at the Southern Hemisphere Proving Grounds near Cardrona.

There were only 10 passengers on his Air New Zealand flight.

Avsec staff were at the terminal doors reminding people to sign in for contact tracing purposes, Ms Irvine said.

At Invercargill Airport, about 20 people disembarked from a flight from Auckland about noon.

One passenger said Tuesday’s announcement had forced him to cut short his trip to Auckland to help his daughter move into a new house.

Invercargill Airport general manager Nigel Finnerty said the terminal had been quickly set up for Alert Level 2, with social distancing guidance, hand sanitising stations, reduced opportunities for incoming and outgoing passengers to mix, more cleaning, and QR codes at all entrances and exits.

"Passengers have been really understanding, and seem to have taken the changes in their stride, particularly around the social distancing.

"We have also worked with our staff to reduce the chance of exposure by changing some work patterns and providing extra PPE."

Health board medical officer of health Dr Susan Jack said it was not testing people arriving at Dunedin, Invercargill and Queenstown from Auckland unless they had symptoms or had been identified as a contact of someone who was confirmed to have Covid-19.