The Barry Kloogh fraud case may soon return to court as his liquidators seek funds from the sale of a property possibly bought with stolen money. 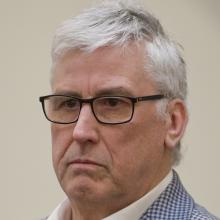 Barry Kloogh
Kloogh is serving a sentence of eight years and 10 months on multiple theft and fraud charges imposed in July last year, for having used a Ponzi scheme to bilk investors of an estimated $12 million.

Kloogh also placed client funds, which he should never have been in personal possession of, into his personal bank accounts.

Neither firm has any substantial realisable assets and Kloogh is bankrupt.

However, proceeds from the sale of an Earnscleugh holiday home owned by two trusts associated with Kloogh - funds which liquidators reported a year ago were about $450,000 - have remained frozen in a solicitor's trust account for several months while investigators try to trace the fate of individual assets of the 100-plus affected investors.

"The analysis of the banking records of the company has assisted the review of how these properties were funded," the report said.

"It is anticipated that an application to the High Court for the funds will be filed shortly."

However, a successful application would likely offer little comfort to the people whose trust Kloogh betrayed.

The Official Assignee’s time charges for its investigation stand at $80,790 so far, and the firm had $112,956 in unsecured general and trade creditors.

"Initial indications are that there are no substantial realisable assets of the companies."

Investors who got their funds out of FPL just before the Serious Fraud Office raided Kloogh’s office and properties in May 2019 were also warned once more by liquidators that they might be liable to pay some of the money back.

Following a Court of Appeal decision in the Ross Assets Management Ponzi case, liquidators are able to pursue "fictitious profits" - full payouts of funds to an investor which can be shown to have been paid out using funds traceable to another investor.

"The liquidator is undertaking a review of investors who withdrew the full value of their investments from the scheme in the two years prior to liquidation.

"Unbeknown to those investors, these payments may have included an element of fictitious profit."

The Official Assignee said due to the complex nature of Kloogh’s offending it was still not possible to estimate when the investigation would be completed.

"It’s continuing to be a lengthy process and it continues to be frustrating."

The Financial Markets Authority said it was also still investigating the case, specifically whether all financial institutions involved had complied with regulatory requirements.