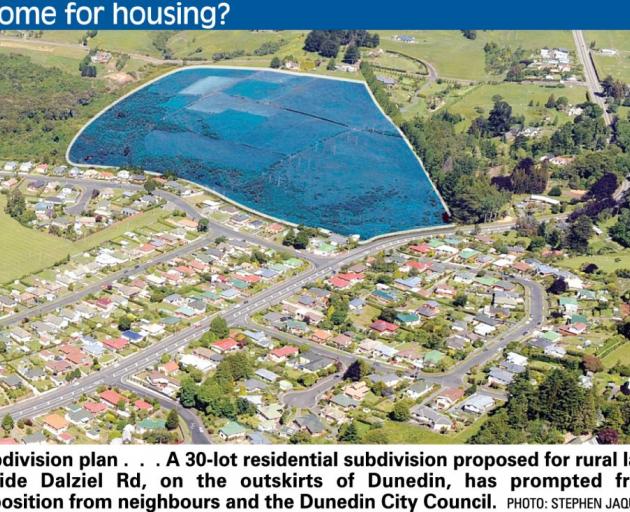 A developer's long-running battle to build new homes on the outskirts of Dunedin has run into fresh opposition from neighbours and the Dunedin City Council.

Thomas Richardson, a director of RPR Properties Ltd, has applied for consent to subdivide five lots into 30 smaller ones between Dalziel and Taieri Rds.

The application is the latest step in a long-running battle by Mr Richardson to develop the site, which began in 2004 with plans for a 100-lot residential subdivision in the area.

He eventually scrapped the larger plan, but in 2013 won consent for a nine-lot subdivision of 41 Dalziel Rd, after years of delays, knock-backs and an Environment Court appeal.

But the proposal has prompted fresh objections from neighbours and opposition from the council, whose planner, Lianne Darby, raised traffic safety and other concerns and recommended consent be declined.

Mr Richardson said when contacted yesterday he was ''a bit disappointed'' by the recommendation, but confident the latest hurdle could be overcome.

''I would have to say to some extent I'm not that surprised,'' he said.

Ms Darby, in her report to the committee, outlined concerns about increased traffic in Dalziel Rd as among the reasons for her recommendation.

Up to 250 extra vehicle movements a day could be expected - amounting to a 33% increase - if the development went ahead.

That raised concerns for neighbours about safety on the narrow, undulating road, including for children riding horses in the area, as well as disruption to their existing rural-residential outlook.

Mr Richardson said he had discussed safety concerns with council staff at a pre-hearing meeting earlier this week, and was now proposing to relocate the site's entrance from Dalziel Rd to Taieri Rd.

He hoped that would address the safety concerns, although he was less sympathetic about neighbours' concerns about new homes being built next door.

Their views might look rural, but the council had already granted consent for nine new homes on what remained a largely undeveloped paddock, he said.

''It's not an open paddock. They [neighbours] are just dreaming,'' he said.

The proposal has attracted 29 submissions, of which 20 opposed the development, seven supported it and two were neutral.

Dean and Angela Ruske, owners of the Establo Alpacas and Farmstay, at 38 Dalziel Rd, worried the extra homes could erode the area's semi-rural environment and ''significantly'' damage their business.

John and Naomi Mottershead, of 34 Dalziel Rd, said the development would be out of character for the area, and raise safety concerns for children and adults riding horses along Dalziel Rd.

The development was near an established pony club, which brought parents and children into the area on horses and ponies.

''The increase in traffic could make riding quite dangerous for them.''

Lynn Gipp, of 14 Dalziel Rd, said roads in the area were already dangerous because of the high speeds of motorists, resulting in ''a few near misses'' and spooked horses.

The development also risked devaluing property prices, and would prompt homeowners in the area to seek compensation from the council, she warned.

Ms Darby's report said the proposal, which sought to use rural-zoned land for residential development, was a non-complying activity under existing district plan rules.

That said, the area's rural outlook was ''misleading'', as consent had been granted for nine homes, most of which were yet to be built.

The city's second generation district plan (2GP), notified in September, also earmarked the area as a future site for ''large lot'' residential development, and the proposal would be permitted once the new rules were in force, she said.

The application would be presented to the council's hearings committee on November 23.