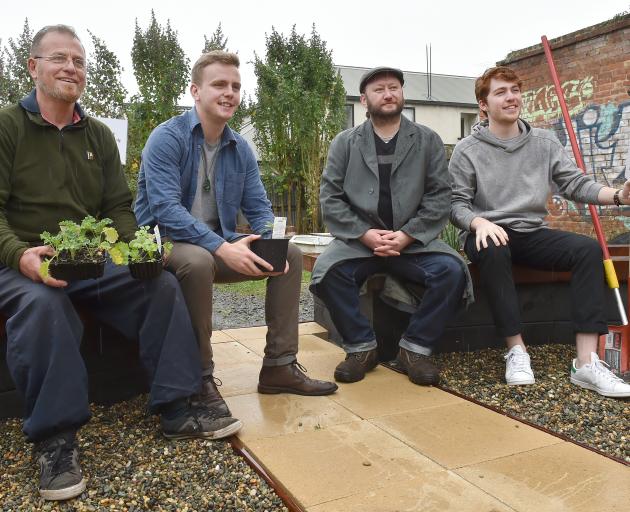 Contributors to the Kiaora Peace Garden (from left) Paul MacDonald Gourlie, John Laurenson, Andrew Rudolph and James Heath say the garden is an opportunity to create an interface between the city and the university. PHOTO: GREGOR RICHARDSON
Eighteen months ago, 76 Albany St in Dunedin was an empty section where people dumped their rubbish.

Now it is home to the Kiaora Peace Garden, a place for people to come together and do whatever it is you do in a garden.

It was the idea of Dunedin man Paul MacDonald Gourlie (74) who aimed to create a common space for city locals and university students.

Mr Gourlie, a former Otago University Students Association president, said the garden, across the road from the university's central library, was an opportunity to show how people could live well together.

"18 months ago ... it was dirty and untidy. The house [next door, which he now lives in] was known as `party central' and often the front area was covered in glass.

As the house and garden has been done up, respect has come from the locals."

Mr Gourlie oversees the garden and said enthusiasm for it was evident, as people became aware of the importance of healthy living.

"It's all organic edible vegetables, peas, broad beans and lots of herbs."

The project was sponsored by Mitre 10 Mega owner Martin Dippie, who provided equipment as well as arranging for Auckland builder Stan Scott, (star of their "Easy As" videos) and other local builders to help out. Other people donated plants and time.

There was not a lot of space at the university for creating and making things.

"There's a lot to be said for your mental health, creating something out of nothing. We just needed the space to do it."

Mr Laurenson hoped students would learn to make their own planterboxes to have at their flats.

The garden had been used as a teaching space by the university, as well as a meeting space for environment groups.