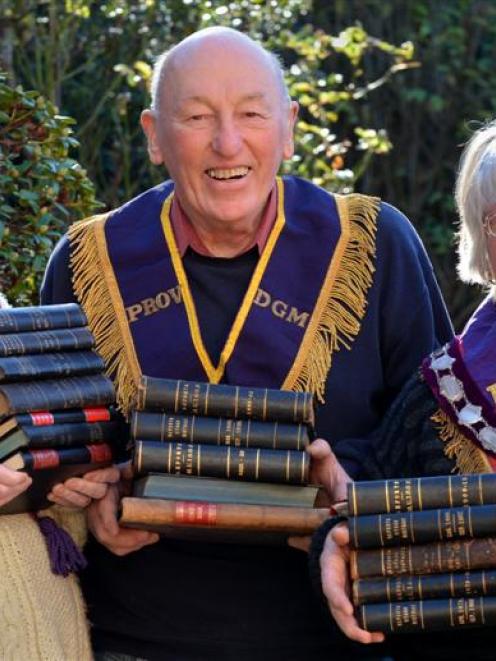 Dressed in Otago Friendly Society ceremonial garb, member Melva Opai (left), deputy provincial grand master Leslie Cantwell and provincial grand master Sue Cantwell hold some of the records of the 164-year-old society. Photo by Peter McIntosh.
The Otago chapter of a "secret society" is about to disband more than 160 years after it was formed by some of the first Scottish settlers to come to Dunedin.

The Otago Friendly Society, which was formed in 1848, made the decision to disband in 2010 and since then its provincial grand master, Sue Cantwell, has been tracking down members and the families of deceased members in an effort to give them their share of about $1.6 million held by the society.

She had traced about 330 members but had not found four or five people who were entitled to between $800 and $6000.

She would be sad to see the society go, but glad remaining members were getting a final payout.

The Otago society was set up by John Wickliffe settlers, but the society's history dated back hundreds of years to the original chapter in Manchester.

At its peak in the early 20th century, it was one of the largest societies in Otago, with halls in many towns.

The last hall owned by the society in Stuart St, Dunedin, was sold in the early 2000s.

Ms Cantwell said the society's main original purpose was to provide a safety net for members, who were given a small sum of money each week if they fell ill and could not work. This safety net ceased to be so important once the welfare system was introduced, part of the reason why membership had declined. Growing workloads and a lack of spare time were other reasons why the society, like others, had declined.

Member Melva Opai said she was one of the few Otago members left who knew its secret handshake. However, she said the society's secret rituals had become less important over the years and now that it was about to disband she could reveal it.

"You need to shake hands with [both people's] thumbs parallel and then have two distinct shakes," she said.