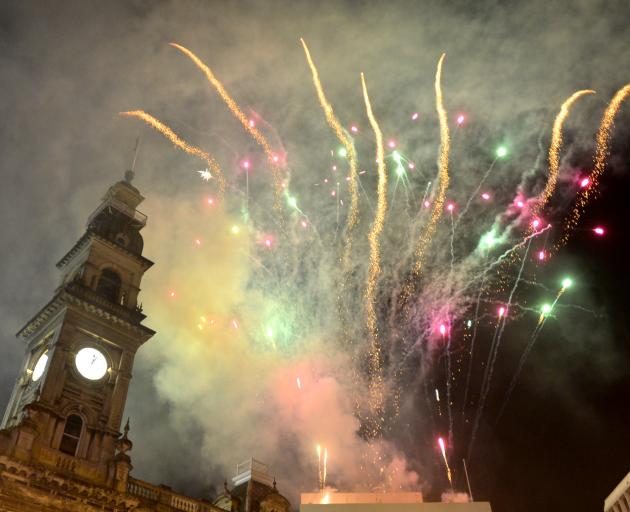 Fireworks light up the night sky over the Octagon as Dunedin welcomes the new year. PHOTO: GERARD O’BRIEN
The new decade started with a bang in the South, as midnight fireworks capped off New Year’s Eve celebrations blessed by balmy temperatures.

The evening was also largely trouble-free, and police praised the behaviour of revellers.

A police spokeswoman said despite the large crowds, there were no major issues in Dunedin, Wanaka, Queenstown or the Rhythm & Alps musical festival near Cardrona.

Some people were caught drink-driving, and two people arrested in Queenstown for disorderly behaviour were given pre-charge warnings.

"Overall, everyone was well behaved, and it was a great New Year's for the district."

In Dunedin, a good-natured crowd estimated at 20,000 saw in the new year and new decade with the traditional firing of the Robbie Burns cannon, followed by the chiming of the Dunedin Town Hall clock.

A dazzling display of fireworks then burst from the roof of the Civic Centre building, captivating the crowd packed into the Octagon.

In Queenstown, a fine, breezy summer's evening meant the outdoor areas of bars and restaurants were particularly busy in the countdown to midnight.

Revellers in the Octagon watch the fireworks display. PHOTO: GERARD O’BRIEN
As live music pumped from stages at either end of the lakefront, the crowd gradually built as people secured their spots to watch the midnight fireworks display launched from a barge in Queenstown Bay.

About 100,000 people visit the resort over the New Year period, and about 15,000 made their way into the town centre for the countdown.

With sections of Rees St, Marine Parade and Beach St closed to vehicles to encourage pedestrians, and security guards and police enforcing a liquor ban in the streets, the town centre had a family-friendly feel.

St John spokesman Gerard Campbell said Queenstown was the fifth-busiest location in the country, with 10 callouts between 10pm on New Year’s Eve and 3am yesterday.

The main reasons across the country were unconsciousness or fainting, falls, breathing problems and assaults, he said.

Revellers in Wanaka, Hawea and at Rhythm & Alps enjoyed a day of non-stop sunshine followed by a warm evening.

Restaurants and bars along Wanaka’s Ardmore St were packed, and police estimated a crowd of up to 10,000 swarmed the streets and lakefront car-parking areas.

Mr Campbell said St John worked closely with police at Rhythm & Alps, and treated festival-goers for a variety of complaints including sunburn and dehydration.

Paramedics also attended two medical events at the festival: a male patient was assessed and treated by paramedics on-site at 3am yesterday, and a female was taken to Lakes District Hospital by ambulance in a moderate condition at 12.55am.

A callout for a person airlifted from the festival grounds on Sunday was ‘‘possibly drug-related, but we can't confirm that’’, Mr Campbell said.

In Oamaru, about 200 people took in a free, family-friendly party at Oamaru Harbour, put on by the Waitaki District Council and Otago Community Trust.

The alcohol-free event featured a ‘‘kids zone'', face-painting, and live music from local favourites the Heavy Feathers, and Dee May and the Saints.

"And maybe for the big kids that have to work tomorrow", Waitaki Mayor Gary Kircher said.

Oamaru Harbour watering hole Scotts Brewing Co, next to the street party, also seemingly enjoyed a roaring trade under clear skies before the official welcome of 2020 at midnight.

Hundreds of festival-goers attended Bass Camp in Dipton for New Year's Eve, and while the warm evening was chilled out, event co-organiser Matt Turnball said the evening party was the time for celebration.

First held last year, the event was designed to fill a gap in Southland.

Mr Turnball said there was a lack of festival-type events, and he wanted to create something that would draw people to the region.

About 700 people spent their New Year at the campsite, with two stages and a wide range of activities to participate in, including print-making, children's arts and crafts, fire performers, yoga and mediation workshops and face-painting.

Locals and visitors came together for the annual Fiordland Rotary Club Party In The Park in Te Anau on New Year’s Eve.

Numbers built as the night progressed, and a big crowd had assembled on the lakefront in time for the midnight fireworks display.