Graduating rockers thrilled by the chase 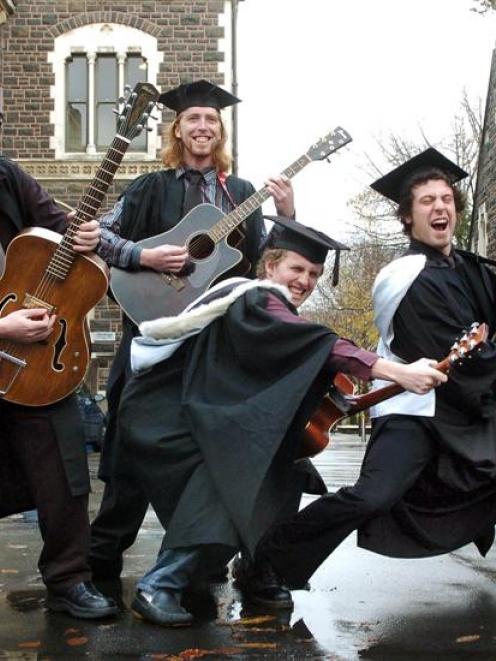 Dunedin musicians (left to right) Ben Hart (27), Sam Rogers (24), Tim Hambleton (28) and Oliver Sunley (21) are leaving the University of Otago for Australia, in search of a professional music career. Photo by Gerard O'Brien.
Four University of Otago students may be about to graduate to the musical big time.

They were among more than 370 graduands, mainly in humanities and health sciences, who graduated in person at the Dunedin Town Hall ceremony.

The band's name was gleaned from an Otago Daily Times story last year about the police pursuit of an unlawfully taken bus.

The album will be released on June 13, and, after performing in Dunedin, the five musicians plan to move to Melbourne to promote their music and themselves as professional musicians.

The other members joined forces during music studies at Otago.

Mr Hambleton said band members were grateful for the mentoring support provided by their Otago University music teachers, including Dr Graeme Downes, founding member of the Verlaines, and Dr Robert Burns, a London-born professional bass guitar player, who are both senior lecturers in contemporary rock music.

Dr Burns, who also played bass guitar on the album, said it had been professionally produced, and the band was creating high quality, memorable and "radio-friendly" music.

As well as learning more about classical music theory, the young musicians had eagerly thrown themselves into their study of contemporary rock music, music technology and papers on the music industry, the latter including insights about music contracts.

And all this they had applied to their quest to become successful professional musicians, he said.

Mr Hambleton said that, for the band members, studying and performing was "a journey we've gone through together".

"We've grown up pretty much and it feels like time to face the big wide world and whatever it brings."