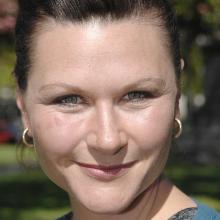 Megan Martin.
More than 2600 University of Otago and Otago Polytechnic students, a record, will graduate this month, sparking  demand for hotel beds and restaurants and boosting the city economy.

Graduations provided a "fantastic" boost for the city economy, and were "great for the hospitality side of things".

Ms van der Vlierd said there were  still some hotel beds available over the graduation period. The December graduation season starts  tomorrow,  with two  polytech graduations, at 12.30pm and 3.30pm at the Dunedin Town Hall.

This is the first time the polytech has held two December ceremonies in the city, and overall  graduation numbers (1430) were well up on previous years.

Ms Martin said the polytech was "delighted"  so many people were graduating and that many family members and friends could attend the two ceremonies.

More than 2600 Dunedin tertiary students will graduate in person this month, including more than 700  University  of Otago students attending two ceremonies at the Dunedin Town Hall at 1pm and 4pm this Saturday. Those students will graduate with physiotherapy qualifications and bachelor of medicine and bachelor of surgery degrees, as well with other qualifications, including dentistry, medical laboratory science, and pharmacy.

The growing number of December graduates  was "great for the city". Enterprise Dunedin director John Christie said the graduations provided a significant economic contribution and were "very positive".

Otago Motel Association immediate past president Gavin Turner said there were still some motel rooms available in the city.