"I have made it quite clear to everybody: I’m here and I’m staying here. I am not going in to a home as long as I can still manage."

Making sure the 95-year-old gets her wish is the job of support workers like Helen Cockerell.

Mrs Ferguson is the first call of what will be a busy morning for Ms Cockerell — who works for Access Community Health.

Having lived in her unit for 33 years — "I moved in two weeks after it was finished" — Mrs Ferguson has no intention of leaving.

Support workers like Ms Cockerell have the job of ensuring people like Mrs Ferguson can do just that.

Mrs Ferguson receives a daily visit from an Access worker — a basic welfare check set up after a spell in hospital last year — which ensures medicines are being taken and household chores which are beyond Mrs Ferguson are done.

Ms Cockerell visits three times a week to shower Mrs Ferguson and carry out other tasks.

"I can still do my own washing and put it out and I do my own meals — I like to choose what I eat," Mrs Ferguson said.

Care from health workers such as Helen Cockerell mean Brian Sinclair (87) can continue to live in the Forbury house which has been home for more than 40 years. Photos: Craig Baxter
"But last year I wasn’t feeling very well and I needed a bit of help."

She was offered a job at Access as a care co-ordinator, but after five years of office work wanted to get back in the field again.

"I didn’t like the office work as much as I liked working with the older people," she said.

"I get on well with them, and I’m really at ease with the older generation."

Mrs Ferguson is still active ("I charge around like a bull in a china shop") and is close to her family of four children, 11 grandchildren and 22 great-grandchildren.

The family help offered by her daughter Denise is invaluable, and a cog without which ageing in place could not function — a US study has estimated the value of unpaid family carers for relatives at more than half a billion dollars annually.

For clients on Ms Cockerell’s rounds whose relatives seldom visit, or who have no family at all, the range of support workers they see — Ms Cockerell, as well as district nurses, Age Concern visitors and other helpers — keep them active and are a foil to isolation.

"Loneliness is a part of life for many of our clients," Ms Cockerell said.

"They just love having people come in; it is a security blanket knowing someone will be in every day, because some of them don’t see family that often."

Noeline Collins  is not having a good morning.

Noeline Collins (86) receives regular visits at home from health workers to check she has all she needs.
Just out of hospital, she had a bad night and is not feeling well  — a visit from Ms Cockerell to make her a cup of tea and freshen her water glass sees her spirits revive.

"I’m not used to having help, I prefer to do things myself but sometimes ... well ... never mind," she said.

Visiting Danella Flett’s home of 30 years is like stepping into a mini Botanic Garden — she still keeps the grounds in immaculate condition.

Her visit from Ms Cockerell is a quick checkup on her progress — the washing would have been hung out but the machine has yet to finish its work.

There is no break for Ms Cockerell though — Brian Sinclair’s feet need doing, and it is care like hers which means he can continue to live in the Forbury house which has been home since 1974.

"I’m not too good in the walking — my balance is not too good and my toes are quite tender," Mr Sinclair  said.

"I get home help with the washing and cleaning and showering.

"I was going to go in to an old people’s flat and I started chucking everything out, but then I realised if I chucked out very much more I wouldn’t have anything left, so I stayed."

Gwen Robertson — and her dogs Lenzo and Leroy — are Ms Cockerell’s final stop of the morning.

The animals gambol around her unit and demand pats and belly rubs while their owner’s arthritic feet are prepared for a shower. 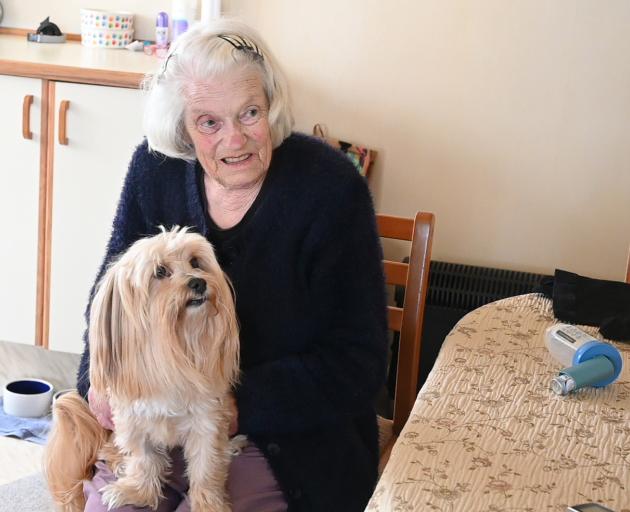 Care at home means Gwen Robertson (75), with her dog Leroy, gets to stay longer in her flat while battling COPD.
"I was walking them until recently, wearing a belt and tying it to that [her walking frame] and pushing it about and I was able to get a decent walk for them, but it’s just the breathing now, which is a bit of a shame," the 75-year-old said.

She is battling chronic obstructive pulmonary disease (COPD), and hopes home help means she can stay longer in the unit she has called home since 1990.

"I have arthritis which has started getting bad in recent times and the medication for the arthritis affects the COPD ... the help is wonderful, with district nurses and Access — and the dogs think it’s lovely."

Ms Cockerell’s clients all clearly value her work, and her.

"It is a person-centred approach to care, but you can’t help but be task-focused at the same time — you are trying to give them your time, but we also have the pressure of the allocated time that we have to see them before getting on with the next task.

"That is the hard part of doing this work because there is a temptation to continue your relationship outside of professional boundaries."

She delivers two levels of care: personal care, which involves checking medicines, showering, dressing, organising meals and other hands-on tasks, and home help, such as cleaning and tidying.

Ms Cockerell sees around 10 clients a day, and many of them she sees daily — continuity of care is important for many reasons including gaining trust, monitoring ongoing medical situations, and spotting if clients are finding it more difficult to cope by themselves.

"If we see anything important we contact the nurses at Access, register our concerns, and they take it from there, in conjunction with family members and healthcare professionals."

While caring is a rewarding job, it can also be a gruelling job — many of Ms Cockerell’s clients are not well, and serious illness and sometimes death are occupational hazards.

"It does happen, it is sad, and it’s up to the individual how they cope with that," she said.

"I have heard many times from clients that they have had a good innings and they know what is coming — that makes it a whole lot easier."